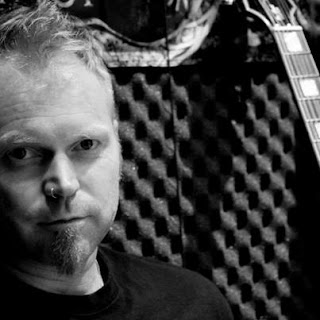 Rusty is a talented musician that created his own project some years ago and has delivered already two good albums under his mark Rusty Pacemaker. He says he is not an extraodinary guitarist, but he has the ability to transmit emotions, and in my opnion that is more important than playing very quick or very technical solos.

Hi Rusty, this 2015 you have released “Ruins”. But before going for it let’s talk about your solo project called Rusty Pacemaker. When did you start it up and why a one-man band?

Well, I started to play guitar pretty late at the age of 28 and only because I got a Strato imitate and a mini amp as a present. I would never even have thought me to start playing guitar that late. Nevertheless I consider that moment when I tried to get the first tones out of this guitar as the start up of my career as a musician. It must have been 2003, I guess. From the first moment on I wanted to invent every tone and riff by myself and consequently I dreamt of creating my own music. It felt like if you would open a valve and creativity started to flow. Everything happend quite naturally and to be honest I didn’t even think of being in a band. I just did it, all by myself. Over the years I collected instruments, recording devices and improved my skills on the instruments, on recording and producing. At least I have a drummer and I am lucky cause he is a professional and exceptionally good one.

A curious history, indeed, and one of perseverance, for sure. If I’m not wrong this is your second album as Rusty Pacemaker. To be sincere I haven’t listened to your first effort. Are there any important differences among them?

You are right, my debut album “Blackness and White Light” has been released in 2010. The most obvious difference is certainly the production quality, the sound. When creating my first album I did everything the first time, songwriting, recording and production. I was not experienced at all in this process of creation and for sure one could hear this. I would say that “Ruins” is heavier and more Metal influenced than “Blackness and White Light” which I would describe more as Dark Rock. Though there are differences between the two albums I think that still they have many in common especially the dark and melancholic atmosphere.

Have you counted with some help or contribution when composing the new songs for “Ruins”?

I write and compose all by myself. Preproduction and composing happens at the same time in my studio. I always come up with a riff, intro or melody line on the guitar and record. Upon this idea I build up the whole song then. Concerning the drums I program a simple rhythm on the computer and when the song is finished I hand it over to my drummer and he arranges the perfect drumtrack for my music.

How long did you need to have this “Ruins” ready?

Well, between “Blackness and White Light” and “Ruins” lie almost 5 years of time. That’s quite long, I know. The main reason for this is simply that I run my musical career beside my regular job and beside having a family. I haven’t got so much time left to work on my music like I’d love to but I really don’t want to complain about that cause actually I feel privileged and grateful that I am able to create and produce art. It‘s just amazing that this is possible for me in this life. Nevertheless I do hope that it won’t take another 5 years until album number three will be released because I’m just too curious of how my future songs will sound like. 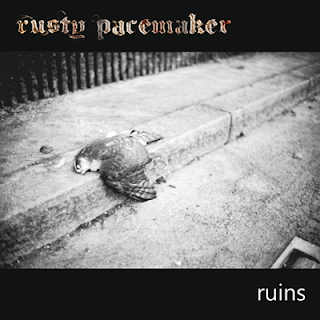 I understand you and share your vision, it’s actually a privilege to do in this life what you most like, especially when you can do it without paying no accounts to anyone, just your own creation. Tell us a little about the story of “Ruins”. What do you talk about and what did you want to transmit with it? Is there any personal story behind it?

Writing lyrics is always something personal. Everything what is expressed in any form by someone is a result of these personal experiences, thoughts, wishes or fears and fantasies. That is unavoidable, I think. Generally I like to use simple wording for my lyrics. I always seek to bring it to a point in a direct and simple way. I’m searching for wisdom and wise words are always simple, easy to understand and nothing complicated. Thematically I try to describe humanity's weakness and frailty. I write about the human being as an egoist and I think that the source of his weakness resulting in his evil behaviour is the fear of death. But at the same time it is very important for me to show that there is hope, light in all the darkness and that is love. This might sound strange to you but actually I use darkness trying to make the world a better place. Being an artist I consider this as my responsibility.

It’s very interesting and I totally agree with your opinion, fear of death, egoism and greed are dark and strong forces. In my opinion you are a good guitarist, good solos and riffs, but you also know how to create dark or emotive atmospheres. What part do you like more when composing?

First of all thank you very much for your compliment! Actually I don’t consider myself as a good guitarist. I really love my guitars and enjoy playing them but when composing my guitar is just an instrument, a tool  that helps me to express feelings and create atmospheres. No matter if it‘s a riff, a melody line or a solo, each and every tone should serve the atmosphere and feeling of a song. That is what art is about. Artists try to give feelings a transportable form and try to achieve that the consumer is emotionally touched by the artwork. And so do I.

And what is the most boring of finishing up an album by yourself?

By far the most boring and at the same time exhausting part is editing. As I told you before I don’t see myself as a very good guitarist neither I think that I am a very good singer. Consequently I have not enough selfconfidence that I record one take and say: “Well, that’s it, let’s do the next part!“ I always record three, five or even more takes. To listen through the takes, to decide which one would fit best to the rest of the material and to edit is a lot of work what exhausts and sometimes bores me. But in the end also this work leads to a satisfying result and when I‘ve finished a song it just feels good. It’s so nice to listen through the raw recordings when all takes, tracks and instruments harmonize so very well.

I suppose the guitar is your favorite instrument, isn’t it? As a guitarist, what are your main influences?

That is an interesting question for me as I never thought about it before. Well, as every Rock or Metal guitarist I am impressed by Tony Iommi especially when it’s about riffs and rhythm. His style is so clear, pure and direct. I also love the guitar playing of the Cavanagh brothers. Both are awesome guitarists but never put their extrordinary skills into the foregound. Their soulful playing always serves the composition and create these beautiful sounds which are so typical for Anathemas music. I think I have a similar approach when creating my music but I can honestly say that as a guitarist I don’t try to imitate anyones playing. This wouldn’t make sense to me. We are all individuals, so am I and as such one I have to find my own individual style.

And about the music style in general, what bands have marked your sound?

I have a pretty large collection of albums at home and for sure I’m inspired somehow by all these bands in a specific way. When I discover a certain atmosphere or feeling in a specific song then I try to recreate this atmosphere in my own style. Very often something completely different comes out and I find myself surprised by this sound what is an amazing experience. In these moments it feels like if I wouldn‘t have any control over my songwriting. I don’t mind this happening, I rather enjoy it. Anyway, if you want me to name bands I feel inspired by these would be Black Sabbath, Anathema, Enslaved, Tiamat, Lake of Tears, Bathory, The Blood Divine and many, many more.

My favorite songs are “Ruins” and “Candlemess”, where you get to play not only great parts of guitar but  you are able to create also awesome atmospheres and instrumental passages

Thanks again for your appreciating words about my music. The two songs you named are more of an epic style and I really like them a lot. But to be honest I don’t have any favorites among my songs. If I would have favorites it would mean that I like other songs less and that‘s just not the case. I put so much work and passion in each and every song, you know. I also have different memories to each song and so an individual relationship to every song is developing and it’s kind of impossible for me to prefer one to any other.

Have you played your album in a live show?

I never did live shows and there are no plans to do any at the moment. The reasons for that are mainly of private nature. On the other hand never say never and I want to be openminded. If there are fans out there who want me to play live maybe I will one day. This would  consequently lead to a band situation what would be interesting as well. But I don’t want to force myself into anything like touring and gigging, it has to come naturally otherwise I wouldn’t  have a good feeling about it.

You are from Austria, how do you see the Metal scene over there?

Austria is a small country and so is the Metal scene. If you want to become internationally successful then Austria is not the best place to start off. It exists only one bigger label and that is Napalm Records. All other labels are more underground. To find a proper distribution company is very hard too. But we have some really interesting acts and though the underground scene is not very big it‘s alive, especially in Vienna where most oft he gigs and concerts take place. My personal favorite Austrian bands are Summoning, which are well known also outside of Austria, and Hollenthon.

Do you work in another projects apart of Rusty Pacemaker?

No. I don’t have enough time to work in other projects. It would be just too nice to make a living with music only and work in different projects, wouldn’t it?

Yes, it would be a dream come true, I guess, as I said before, to work in what you love every day of your life. What are your plans for the future?

Well, life is what happens while you make other plans. But concerning my musical career I can tell you that I will finish the promotional and label work soon to be back on the guitar and to write new songs. I am just too curious of how my future songs will sound like. It is always an amazing experience to be creative and I’m looking forward to it. The plan ist to come up with a new album as soon as possible.

No wishes, no hopes and no expectations. Sounds pessimistic but I don‘t mean it pessimistic at all.