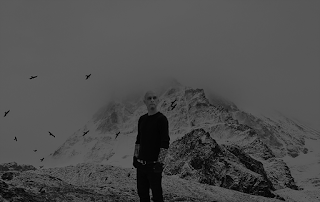 CWEALM is a new band from Sweden, just debuting with his first full-length Odes to No Hereafter, a one-man project recommended for all the people who enjoy black death metal, a great blend of 90s sound with new and fresh touches and ideas. Astraeus is a great musician with a very developed artistic vein in all senses.

Hi Astraeus and welcome to our underground metal site

Thanks. Since I don’t speak Spanish I can only enjoy your English interviews, but I see you’ve reviewed and interviewed many a great underground band. Keep up the good work!

Thanks man, we continue with our battle to spread good Metal around the world, from small or big bands, but always great Metal. And so Cwelam is here! Congratulations for your first album as Cwealm, the great Odes to No Hereafter, a big surprise for the Metalbrothers that work in this web

The pleasure’s all mine.

Cwealm is the creature of Astraeus, so how was it born and who is under the nickname Astraeus, if you are ready to unveil the mystery?

Cwealm was born in 2014, but I had had ideas for a long time before that. Even full songs: Kadavret and Nidhuggs Hymn were written many years prior to Cwealm's founding, though they were honed and somewhat rearranged for Odes to No Hereafter. The reason I started Cwealm in 2014 was because of a creative boost or how I should say; a malicious, internal force that grew stronger than ever. I felt I could delve into unexplored fringes of myself and get more qualitative results out of it.

My real identity? I don’t see that as important, but for those curious it shouldn’t be that hard to find out.

Yeah, you are right. Cwealm is a one-man band, that is, all the music in this first album is thanks to your effort, except for the drums which in this case are played by Jocke Wallgren (Amon Amarth), right?

Correct. I used programmed drums first, but when I got the opportunity to work with Jocke, the choice was easy. And the album got so much better for it!

No doubt. How long have you worked on Odes to No Hereafter?

Depends on how you view the matter. Some riffs are, like, ten years old. But I’d say since 2014, because that’s when I started Cwealm for real, with a conscious vision of what I wanted to do.

Cwealm is a black death metal band. In your opinion, what are the most relevant points in your musical approach?

Hard to express without sounding shallow. You know, I see Cwealm as a transcendent project where music, lyrics and imagery should combine to make a whole – bigger than the sum of it’s parts. But mournful melodies, speed and aggression are of course pivotal corner-stones of the project.

A perfect definition. I love the way you create atmospheres but also the great range of sounds we find through the whole album 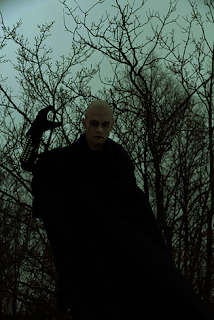 Thank you. Yeah, this was a conscious choice: to stay within the borders of 90’s influenced melodic black but to experiment with it, keep it varied, so as to give the listener ”surprises” along the way. Which I hope will make the music more rewarding in the long run.

Kadavret is one of my favorite songs, it shows the variety I was talking about before, with a great work on keys and riffing, growing in intensity till the final blast

Again, there’s a reason for it being the album's last (full) song. It has a kind of narrative structure, musically and lyrically which I thought made it fit to finish the record, or at least be the last ushering towards the final bitter end, which would be the outro. Kadavret is, by the way the only song where the lyrics aren’t written by me. It’s a poem by Charles Baudelaire, called ”Kadavret” (The Carcass) in Swedish whereas the original French title is ”Une Charogne”. From Les Fleurs du mal (The Flowers of Evil, 1857).

Cool! Odes to No Hereafter is a great debut album, it shows an old school vein but you don’t forget your own and new ideas

The old school thing was important since that’s were I come from. Not the old school of the eighties (which is great: Bathory, Tormentor etc.) but the nineties. When I started listening to this kind of music  Mayhem, Dissection, Emperor etc. were bands I checked out first. So they became the base. When I write, I have that kind of stuff in me. But wanted to add my own personal touch of course – plus that a lot of non-metal has influenced me: classical, medieval music, circus music, folk music etc. I’d say that the album is a synthesis of the three sources I just mentioned.
Cwealm is a band from Sweden, we can suppose the northern metal has influenced your sound, is it this way?

For sure. Scandinavian black metal as well as the non-metal influences are, I think, the most important.

As I mentioned before, you got the cooperation of Jocke Wallgren on drums, how did it happen?

It happened thanks to Tore Stjerna who mixed and mastered the album. As we transfered Cubase projects from my computer to Tore’s, he asked if I wanted Jocke to play the drums. And after listening to some YouTube-clips of the guy I immediately said yes. So the drums were recorded last – at Necromorbus Studio in Stockholm.

Are there any other kind of contributions in the album? For example, we liked very much the cover too...

The cover is an old miniature by the Spanish painter Francisco de Goya. I’m not terribly well-versed in art history, but I like e.g. the romantic period and not least de Goya. For those that buy the album, even more old art awaits: from Odilon Redon, Matthias Grünewald, August Brömse etc.!

I should have known about Goya... ups! Hahaha. As a musician, you enjoy the most doing or playing what?

Playing the guitar. Also playing drums, actually, though I’m not very good at it. Writing music is cool too but that’s always a more painstaking process.

Cwealm is born as a one-man band. It will continue this way in the future?

Yeah. At least that’s how I see it now.

You were signed by Italian label Dusktone, guys with a list of extreme bands in their roster. How do you feel about it?

Great. As you hinted, Dusktone has some awesome bands from around the world; with a focus on black and doom metal. I’m satisfied with our cooperation so far.

Have you done some gigs around already or you plan to do so in the short-time? In that case would you hire any guys around or you would use samples?

No. I’d love to play live with Cwealm, but it won’t happen in the near future. To use samples is out of the question for anything else than keyboards, so provided I can learn to play the riffs and scream at the same (which I actually doubt), I’d have to hire at least a bassist and a drummer; a friend could perhaps take care of the second guitar. This is not something I can afford. But who knows…

We are patient... Apart from Cwealm do you have another musical activity, some other projects...?

Now that you have made your first step, what are the following chapters for Cwealm?

The next step is to finish the music video I’ve started working on for the song Wither, Tainted Crown. After that, I’m going to write another album. Unfortunately I’m a slow writer though, so it's going to take a while for sure.

Quality is all, even if we have to await a little more. Thanks Astraeus and we wish you a big moment with Odes to No Hereafter and many good things to come in the future