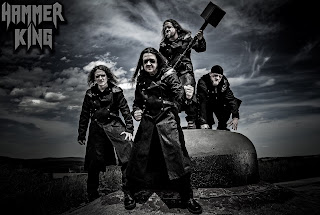 Featuring talented musicians from Germany’s heavy/power metal scene, HAMMER KING  emerged last year with their debut album “Kingdom Of The Hammer King”. Now, it is time to unleash their second opus “King Is Rising”, with a nod towards faster paced songs compared to their debut. Titan Fox was talking to Metalbrothers.es and we enjoyed it, a very interesting chat.

Titan: Hello Metalbrothers, Hello Spain! Thanks a lot, we are happy to see "King Is Rising" released and it's great talking to you!

When was the band formed and how did it happen?

Titan: We really hoped to have a strong follow-up within 1,5 years and thankfully the songs came along really great – and our label Cruz Del Sur Music has been able to put the album out equally quickly. The machine doesn't stop, right. A new band needs to live through putting out albums and playing shows. We try to fulfill both jobs at the same time!

Comparing “Kingdom Of The Hammer King” with "King Is Rising", I think the second is wining, how do you see it?

Titan: I am really glad to hear that! Honestly, it was tough writing songs for the second album as the first was such a spontaneous effort. This time we really worked very much in the depth of the songs, the demo we did for the studio was absolutely worked out into the smallest details. So after some months of hard work we knew that "King Is Rising" was gonna be a strong album – but after we came out of the Studio Greywolf (Hail Charles!) we felt that the album was very much a natural thing. We could feel the confidence and the strength of a grown band. Still it's hard to compare the albums – they are brothers, maybe "King Is Rising" is the bigger brother of the two :-)

Some people calls it power metal, but I think "King Is Rising" is more heavy metal than other thing, although with some roots in other styles, as it’s common in the Metal nowadays.

Titan: Well, I am old enough to remember Heavy Metal before someone brought up the term Power Metal. So I never really got the difference between the two "styles". I think Hammer King's sound is not as "fat" as most Metal bands' sound is. We play many traditional open chords, use less deep strings than it is mostly done nowadays – we do not use samples or keyboards at all, so actually we are quite Heavy Metal in its original sense. We sang all the choirs ourselves, we played everything ourselves, one guitar on one channel, the other on the other – strictly and always. We played the twin leads with two guitar players, not one guy playing both tracks. We even played the recorder (wooden flute) and the castanets ourselves. How much more Heavy Metal can you be?


Horns up! Let’s talk more about it. If your first album was released last year...the Mathmatics say that you preparaded all the pack in less than a year, how was it?

Titan: Yes, we really did. I can't remember how soon the King wrote the first songs for "King Is Rising" after "Kingdom Of The Hammer King", but it must have been quite early – and honestly, there are already bits and pieces for songs for a third album. I personally love doing new stuff, it's what I find extremely exciting about being in a band. Right now the demo-computer is empty, it's a thrill seeing it filling up again! 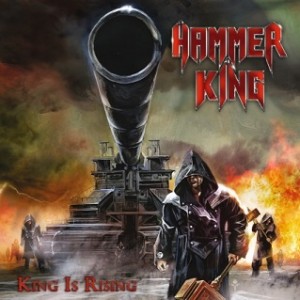 But we have become really very structured and focussed. We have equipment in the rehearsal studio at Castle Rockfort and we record and arrange all the time.

Who has more power inside the band to decide about the composition?

Titan: The KING has all the power! All songs are written by the KING, of course each of us has a certain realm he is responsible for. Dolph does the graphics and designs, the online things, orga work – Gino the financial stuff, K.K. takes care of the warehouse and the inventory, I sort of am the musical director and I do the talking. Plenty of work for everyone!

When listening to "King Is Rising" I was thinking: these guys have to burn it up on stage. In that sense your songs remind me of bands such as Hammerfall, Grave Digger, etc that are a bomb in the live shows

Titan: Very honestly: Yes, we are! We Are The Hammer, we bring you fire! We can certainly say that we do deliver, no matter how tired, how far travelled, how big or small the stage is, we love playing live, we love to sing about the King. And we proudly play all you hear, we sing everything live, no tapes except for the intro!

The cover is stunning and we get the hammer in the middle, kind of an icon already?

Titan: The KING rules with the Reichshammer, so the hammer will always be an icon on the cover, absolutely! We always bring our Hammer on stage and I have used it to rest my feet and hands on in the studio as well – and the people love taking a picture with the hammer at the shows!

I can imagine it hehe. As I said before, I was surprised by the variety in your songs. For example, King Is Rising offers a great heavy power song, with excellent melodies

Titan: Thank you very much for this compliment! We have always been very much into keeping everything melodic, big chords, big melodies, the sort of songs you can directly understand when hearing them live. We are a live band – and we want the audience to sing for the Hammer King.

Titan: Ross The Boss once said to me "You know, everyone tries to play faster all the time. I try to play slower, that's more difficult" – he is right! I love to play moody and slow solos, so I am very much into doing epic stuff. We had Chancellor Of Glory on the first album, Warrior's Reign is like its successor, we also have Dolph's marching snare in the intro and the melodic bass lines. Actually the entire song was a jam session we recorded at Castle Rockfort, we only added vocals later on. I love the vibe of it!

Cool, a very interesting vision. Even we will find some speed metal dose in Battle Gorse. No one can say you repeat the same song once and once again

Titan: We are happy to have such a variety of songs in this very specialized musical path that Heavy Metal seems to be. Many people have requested more fast songs at our shows – and when we got the story of the Battle Gorse, we knew it needed to be fast song! The riff was first, the rest was a jam session. The song was good on the demo, but it got a killer in the studio. The high screams were the last thing I sang for this album. It even is on the studio report video!

What is your favorite song?

Titan: It changes, at the moment it is Last Hellriders, Battle Gorse and Eternal Tower Of Woe.

If you were to make a tribute album, what bands would you cover?

Titan: Ohlala! That's a tough one, really! Maybe we would spare out all our obvious influences like Iron Maiden, Judas Priest and so on and just do unexpected stuff like Simon and Garfunkel, Wishbone Ash and die ärzte – I can't tell! Maybe we would just never do that – who's ever been better than the original band itself?!

Anyway, we thank the effort answering. You have signed by Cruz del Sur Music and the official presentation of "King Is Rising" will be in Rome at the "Burn This Town Festival", sharing stage with other bands in the Italian label’s roster as Sacreed Steel. How do you feel about it?

Titan: That's really great! We are so much loking forward to that! Gerrit came on stage at a Keep It True show we played with Ross The Boss many years back and sang Secret Of Steel with me. So of course I am absolutely looking forward to meeting him again. I love Sacred Steel and I am also looking forward to seeing Gianluca Silva and Battle Ram again. Some old friends from Italy will also be there, so this is really gonna be one hell of a night to kick the second Hammer King chapter into action!

Apart of that event, do you have any other touring dates for next months?

Titan: We are constantly looking for shows and at the moment we are getting more shows than before. We will have a release party at the Hardrock Café in Kaiserslautern, there's Mannheim, Cologne and Ludwigshafen coming up. Two summer festivals have already been confirmed. But we are looking for support shows with bigger bands and we are looking for a booking agency. We want to play more and more, you never improve more than by playing live – and the King wants us to play His songs to as many people as possible.

Thanks Titan for this chat and we wish you a big success with the powerful "King Is Rising", hopefully we will see you through Spain!

Titan: Thank you very much, brother – the pleasure was all mine! Thanks a lot for the support! God bless the King, may the King bless you!
Publicado por VPOWER en 13:00