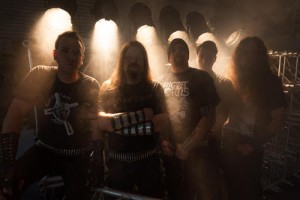 Sacred Steel is doing 20 years in the business and no better way to celebrate it than releasing their 9th album, “Heavy Metal Sacrifice”. It’s all you can expect from the guys, this is, heavy metal with all the classic ingredients. They are alive and kicking stronger than ever and we talk to Mr. Gerrit to know more about this great moment in time for Sacred Steel.

Hello Gerrit and congratulations, because Sacred Steel is living 20 years of history in heavy metal. How do you feel about it?

Hey Alberto!! We feel absolutely great about this!! Of course we´ve had our ups and downs but that´s life. Doing this for 20 years was awesome most of the time.

You are celebrating it with a new album, “Heavy Metal Sacrifice”. Pure heavy metal as any fan will expect

Yeah, it´s the best way to celebrate 20 years: putting out a great testimony to metal itself and to our own legacy. And yes, it is pure heavy metal, nothing less, nothing more.

How long did you work in this new album?

The album was written over the course of only a few months. The biggest part we wrote together on 3 weekends in our rehearsal room. By blood, sweat and beer. The recording itself was done in 9 days. Very quick, very effective. We know what we do now, hehe. It only took us 20 years to find out how.

Hahaha, but you got it! The title “Heavy Metal Sacrifice” could not be more appropiate, it describes what you have done through the years and what we are going to find in the album

Exactly!! Our intention was to have a title that exactly tells the listener what to expect.
If you want to buy a cheese you also want to have „CHEESE“ written on front, right? :) 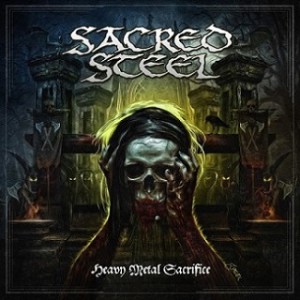 Totally true. As most of the bands that have been in the fight for so many years, Sacred Steel has gone through line up changes. What can you tell us about your current line up?

It´s the same line up since more than 10 years. It´s easy working if you have a team that is constant for so long.  There are not much surprises on a personal level anymore which makes it easier to focus on the goals you want to achive.

The band works as a team and “Heavy Metal Sacrifice” has no weak points, good songs from beginning to the end

I totally agree! In my opiniom it´s the most complete record we did since „Wargods of metal“.

I suscribe it. We are going to find some fast tempos as Hail The Godz of War and Let There Be Steel...

Well, we tried to have everything that makes a good metal record featured on this album. Fast stuff, epic stuff, melodic stuff. Big choruses and lots of different moods. I think that we were successful with that, yeh.

But also good melodies as those in Children of The Sky...

We love catchy stuff but we try to not make it too cheesy anymore. Back in the old days some of the stuff was a bit too much, nowadays we try to keep the cheesy part a bit more controlled. I love „Children“ It´s my fave track on this album indeed...

Melodies cooked at the right point, yeah. Bu also killer riffs as in Vulture Priest that reminds us about metal legends as Judas Priest

Sure, Priest was and is a big influence still! Metal has to feature big and prominent riffs and Priest were one of the best masters in that field.

On the whole, I would say it’s one of you best albums since you published Reborn in Steel back in 1997, full of epic and heavy sounds

“Heavy Metal Sacrifice” will be released on vinyl (limited gold - 200 copies - and regular black - 300 copies - with embossed logo on the cover), right?

--Yes. Correct. We are big vinyl maniacs and collectors, so we need to have our stuff released on vinyl.

Moreover, you are in the club of on of the best metal labels right now, Cruz del Sur Music, that means something, doesn’t it?

It does! We are very happy that they have decided to include us on their small but fine label roster. I think that they are the perfect label for a band like us.

With so many years on the stage, what are those especial moments you will never forget?

Oh, my gosh! Many, many great moments and some silly and painful ones. Looking back I´d say that the most memorable shows were all of our release shows for our albums. Also the first 2 times we played Wacken, back in the day when Wacken was still a kind of underground metal festival. Also our show at Keep It True 2004. And some smaller shows, sometimes with really small but dedicated audiences. Austria and Holland always ruled. And Greece, Spain and Italy!

As a German band how do you see the heavy metal scene in your country and the position of Sacred Steel on it?

We have one of the best and biggest scenes worldwide. We can be totally happy to be part of it. I have no clue where we are compared to other bands and what our position is. It´s not soccer though. We feel connected to each and every band out there, bigger or smaller than we are, that is fighting for the same cause: to keep the tradition of real metal alive!

Warriors united! Are you going to tour across Europe with your new album?

We will play as many weekend shows as possible, wherever possible. But we can´t do a European tour, we all have full dayjobs and we can´t take 3-4 weeks off and leave our jobs behind.

Hopefully you will make some date in Spain. Any especial events to celebrate your two decades in the Metal scene, Gerrit?

Our release show next Saturday will be really special, with lots of old guests, friends and surprises. Apart from that we have planned no special events just regular shows.

Thank you very much, Gerrit, and we wish you a big success with this “Heavy Metal Sacrifice”!

Thank you a lot for your support!! Much appreciated.
Cheers,
Gerrit
Publicado por VPOWER en 8:22