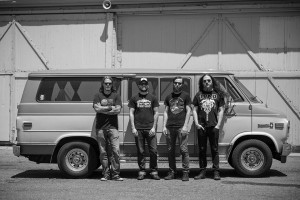 KHEMMIS is a band from Denver, in my opinion one of the most inspired Metal acts you can find nowadays. They have just released their killing second album, “Hunted”. And you know what? They not only have skills and the ability to create great songs, they also have the attitude to continue growing, they are eager to deliver the goods and they will not stop. If you mix all those elements, well, what you get is a monster called. KHEMMIS. Their limit is still far away, if they control beer hahaha. Enjoy this great chat on Metalbrothers.es (what else?)

Hello guys and congratulations for your second album “Hunted”. Khemmis was formed in 2012 but with one ep and two full-lengths in your pockets you are already a force to be reckoned in the doom metal current scene

“A force to be reckoned with” sounds great, but it’s a bit dramatic. We’re just four guys who like to hang out, drink beer, and play rock ‘n’ roll. We just happen to find ourselves driven to constantly write new material since we aren’t living our days and nights out on the road.

I not only accept your words, but I clap your attitude too. Your new album “Hunted” is receiving great reviews and positive comments in all media around the world, how do you feel about it?

It’s really wild. We knew that there were some expectations with regard to this album, but we certainly didn’t expect the response that we’ve had. We’re humbled that so many people around the world feel connected to our music.

Yeah, it’s a great phenomenon. Some people even talk of Hunted as the album of the year, have you touched the ceiling or you still feel that you have space for further progression?

That’s very flattering, especially in a year with incredible releases from Inter Arma, Blood Incantation, SubRosa, Nails, Sumerlands, and tons more. As for our progress, we are far from done. Expect the next album to be as different from Hunted as it is from Absolution.

That sounds cool... I suppose when you started this project you couldn’t imagine that your fame would grow so fast, or you had already some vision about it?

All we wanted was to be in a band with friends and play shows with other friends. Getting free drinks at shows was important, too. Every single thing beyond that is icing on the proverbial cake.

How long have your worked in the composition of Hunted and how was the process?

We finished recording Absolution in November 2014. We started writing Hunted the next month. We always have to balance writing with prepping our set for shows/tours, but there is no feeling like creating new music and we seek that out as often as possible. Next week we’ll begin writing new material because, well, why not?

Awesome, I only can say that. Is there any new element in Hunted that was not present in your first album?
We didn’t really introduce new things so much as refine the elements that we dabbled with on the first album. We tried to hone in on what resonates with us and make those parts as strong and memorable as possible. The solos are more carefully composed, the growls are more evil, the vocal melodies are more memorable with more deliberately-placed harmonies, and our rhythm parts operate independently of the guitar parts in ways that we weren’t able to fully realize on our debut. 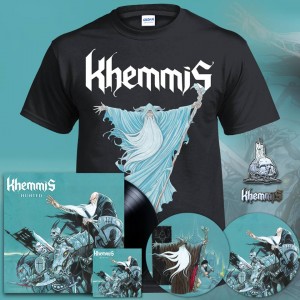 Wait a minute or you will finish the interview in two answers hahaha... One curious thing is that in this second album, as well as in your first one, you don’t include many songs in the album, just five but with a duration near the 50 minutes, it seems in this you also make your own rules, right?

When you play slow, your songs get longer. That’s why “Three Gates” is so (relatively) short – we actually played over 100 BPM on that one!

Awesome again, sorry for the repetition. I love the covers, in all your works. There is a fixed element in all of them which is that shaman or kind of wizard, they have a great old taste. Who is the mind behind them?

Sam Turner is our man. He’s done both album covers and several shirt designs. He has also done all of the work for TRVE Brewing here in Denver as well as art for Speedwolf, Power Trip, and others.

Money attracts money, talent attracts talent, crystal clear.You have released “Hunted” through 20 Buck Spin, a label with a important roster, but if you continue this path I suppose many guys will be knocking on your door to sign you up...

Who knows? We’re taking it all one step at a time and enjoying the moment; the future will be here soon enough.

Musically you are a band with a great range of sounds and compositions, you almost can play every genre. What will be the evolution in next releases?

We are in the earliest stages of putting together new material, so we won’t commit to one direction or another. Let’s just say we try to avoid retreading the same ground.

That’s enough and good for me. Although you could be included in the Doom chapter, as I said before, your music trespass all boundaries and in the first song Above the Water we get a sound typical from the NWOBHM...

Our pal Kim Kelly dubbed us “doomed rock ‘n’ roll” when we released Absolution. We love that description and adopted it wholeheartedly, as we never really thought of ourselves as a doom band in the first place.

Candlelight is another tremendous hymn where the work in the guitars just make my head turn 360 degrees and speak languages I’ve never learnt before...

Ever wonder what it’d sound like if Electric Wizard, Iron Maiden, Lynyrd Skynyrd, and Mounful Congregation were melted down into a swirling, sludgy stew? That’s what we were going for with that song.

Amen. Three Gates is the darkest song in the album, but with a clean and great solo, again evoking a whole mountain of sensations

Thanks, we’re really proud of that one. Our pal Grant Netzorg from In the Company of Serpents (https://inthecompanyofserpentsdoom.bandcamp.com/ ) did a stellar job with the gruff vocals. In fact, he did the whole song in roughly two takes.

Beyond the Door is a nine minutes epic piece with almost everything a guy with good taste could ask, great riffs, awesome rhythm section and the cherry on top with a killing solo...

That was the first song from the new album that we played live, as it just came together pretty smoothly. We love playing that one live, and the “caveman” riff at the end seems to be a big hit with folks in a live setting. It also has the most lead guitar work that Ben has ever had to play in a song – from the bridge harmony through the solo through the melody at the end, it’s basically a three minute lead section.

Craftwork all the way. And we finish the review of this glorious album with the last song, 13 minutes of a magic travel through the universe of Khemmis, we could name it progressive metal, how do you compose this kind of songs?

A lot of people have asked similar questions, but the structure of the song itself really isn’t that wild. There are clear verses and choruses, though there are 3 separate sections that might be considered “bridge” sections. All the same, that one was the first song we started working on with this album and wasn’t completely finished until shortly before we tracked the album with Dave Otero. 13 minutes is a long time to play a rock ‘n’ roll tune without a breather/beer break.

Hahaha I agree! What bands have influenced your sound?

ZZ Top, Thin Lizzy, Judas Priest, Iron Maiden, High on Fire, Neurosis, YOB, King Diamond, Mercyful Fate, and Metallica are probably the biggest collective influences. Beyond those, we all have our own unique tastes that shape our contributions to the band.

Your most especial gig to date has been...?

Migration Fest in Olympia, WA was absolutely incredible. 20 Buck Spin and Gilead Media curated a fantastic weekend of heavy music, and we were honored to be a part of it.

When are we going to see you performing across Europe?

Hell yeah! What are your plans for the future?

World domination and a tour with King Diamond.

Very reasonable. Thank you very much for the talk and please keep composing killing albums as “Hunted”, if you wish to add something...

Drink good beer. Support bands by seeing them live, buying their music, and picking up merch when they roll through your town. Don’t be an asshole. Listen to ZZ Top as often as possible.
Publicado por VPOWER en 10:48