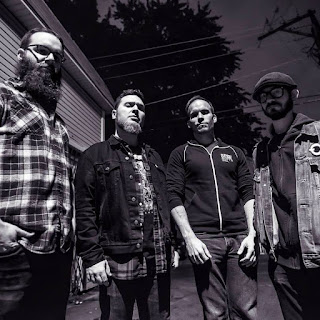 When you have listened to tons of albums from tons of bands is still great that feeling when you discover you can still get goose bumps with some new material, a priceless sensation. And this is what I got listening to these guys from Chicago for the first time. A very powerful progressive metal, you can do headbanging even or let your mind travel far way, it’s just up to you, they put the flight, just come on board!

Hello Mark and congratulations for your great debut album.

Thank you!! We're pretty excited about it.

To be sincere we didn’t know much about your existence till we listened to “In Monochrome”, so please enlighten us a little about your origins. When and how did you decide to start up Black Sites?

A little over a year ago, I was in a thrash/modern metal band that had broken up, and I found myself writing music in a more classic metal/progressive vein. I thought it might be cool to make an album like that, and persuaded Chris Avgerin to play drums on it.
While we were working on the record, Mascot Records entered the picture, and things became slightly more serious. At that point we recruited John Picillo (bass) and Ryan Bruchert (guitar). This brings us to where we're at today -- preparing to release "In Monochrome" and begin playing live.

Black Sites is a parallel project to other bands you have or it’s your main activity right now?

We do have other projects. John is also a member of Without Waves, who have an album coming out in March on Prosthetic Records. Chris plays drums with Nequient, Autonomy, and a few other bands at the moment. Ryan recently played guitar for reunited Chicago grind legends HeWhoCorrupts. As for me, I have a couple other things in the works, but Black Sites is my baby and my main focus right now.

I understand. With “In Monochrome” you should be in the spotlight of many mags of the metal world, but what are your aspirations?

It has been my lifelong goal to be featured on one of the "Ultimate Revenge" VHS tapes, but it seems we've missed the boat on that. Beyond that, I think our mission is to make good music and make sure people hear it. Anything beyond that is just extra credit at this point.

You guys in Black Sites are professionals, I mean, you make a living with music, or this is just a passion, what is your status?

I think we handle ourselves professionally, but no, we all have "real" jobs in order to pay the bills. Playing prog metal is not exactly making us rich.

Time to talk about your awesome debut album. From day to night you release “In Monochrome”, well, maybe there are more days and nights in the middle hahaha… how long have you worked on it?

We began recording in February 2016, and worked on the album on and off until we finished in August 2016. It has been in the hands of our record label since then.

It’s time to unleash it.  In terms of sound “In Monochrome” is a son or your previous or other present acts where you play or have played or it’s some brand new approach for you? Did you rescue any song from other projects?

I don't think any of us have been in bands that sound like this before, so it's a new thing for us. As far as the material itself, there were portions of one song that had been presented to (and rejected by) my old band. And the song "The Tides" was something I'd been trying to finish for nearly a decade, but couldn't quite get it right until recently. Otherwise, everything was freshly written for this album.

Interesting. In our opinion, Mark, one of the strong points of Black Sites is the multiple styles you touch, in that sense we could name it Progressive Metal, but how you define your sound?

I'm not a big fan of labels, but in our case I think "progressive metal" is pretty fair.

What are the lyrics about and what connection they have with the cover art?

I think most of the songs deal with going through some sort of change. Sometimes it's a positive change or personal growth; more often it's reacting to circumstances that have become challenging or negative. Oddly, the cover art has nothing to do with any of that -- I just thought it looked cool, and felt right for this album.

Aha, a license from the artist we coulda call it.  “In Monochrome” will be release on February, do you have an agreement with any label for distribution around the world or it’s a DIY production?

We are signed to Mascot Label Group, who will be handling distribution worldwide for this album.

Well, it’s hard to choose only a song in the album because all of them are killing tracks, you can have heavy metal, groove metal, progressive, a little of everything in one song, I would say this is one of your trade marks

I agree, there's a lot going on in there sometimes. We have pretty diverse tastes and that's reflected in the songwriting. I think we have a lot of classic metal and prog influences, but modernize them just a little so as not to be deliberately retro.

Which song was more difficult to finish up?

I remember struggling a bit with the vocals on "Hunter Gatherer." There's some really high Geoff Tate stuff going on in there, and my vocal abilities are a bit more pedestrian, to put it mildly. I'd like to think I rose to the occasion.

Which song is your favorite? I have to say that I love Locked Out – Shut Down, because of its heavy sound, its crazy riffs and a guitar solo that is like a dawn in a new world…

That's an awesome description of that solo! I like all the songs a lot, but lately I'm really enjoying "Monochrome" and "Burning Away The Day."

What have been your influences as musicians and what band/artist you would choose to tribute with a cover song?

Well, we did record a cover of Scorpions' "Steamrock Fever," which may see the light of day eventually. Speaking for myself, I'm influenced by Black Sabbath, Voivod, King's X, Trouble, Hammers Of Misfortune, Queensryche, Pain Of Salvation, Rush, Failure, Rainbow, Killing Joke, Judas Priest, and about a billion others.

A great mix. Have you already played these songs in front of an audience?

Our first-ever show is coming up next month! We are playing February 10th here in Chicago, at Livewire Lounge. Our friends The Z Chord and Mexican Werewolf are also on the bill, so it should be an awesome show.

A pity, we cannot be there. Do you have in mind to tour around? Only the States or a little further?

Our intent is to play shows in the U.S. as well as Europe. We should have some more specific details about touring soon.

Cool! Finally, how can any guy put his hands over this magnificent  “In Monochrome”? In other words, how to buy it?

I'm glad you asked! Pre-orders are up at http://usa.mascotlabelgroup.com/black-sites . For anyone who'd like to sample the goods first, you can hear some tracks on Spotify.

Thank you very much Mark and the best luck for your project!! If you wish to add something…

I'd just like to say "thanks" for your support and for this interview. And for anyone who's read this far, check out "In Monochrome" -- who knows, you might like it!
Publicado por VPOWER en 13:26