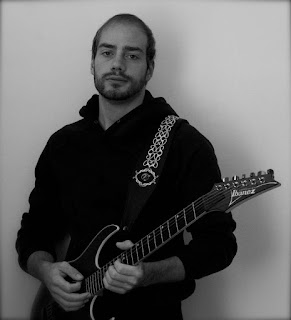 Skycrater is the project of Canadian musician Federico Lucchi. If you read this document you will find out that he is a young but talented artist progressing and improving with every step he makes. Currently living and studying in China is another way to get a more personal and special sound, surely, as he threatens with a third album soon… Read on and discover all the details.

Hello Federico! Congratulations for your second album that has just hit the market some days ago

Thank you very much, I am indeed quite satisfied with the noticeable progress I did compared to my previous album, Journey to the Other Land. The public response is growing too, and “Tale of the Frozen Valley” has been well received and reposted by a few metal fans on various platforms.

Skycrater is your band, a one-man band, you do everything, so we would like to know a little about your musical background, how did you start your Metal adventure?

I started playing classic and Spanish guitar when I was 11 years old. I loved rock’n roll and eventually switched to electric guitar. My family didn’t have a TV or any kind of video games, so I spent most of my afternoons playing my own compositions. In my late teens I started playing bass and discovered heavier music, in particular Blind Guardian. I played bass in two metal bands in Canada, and somehow got attracted to the sound. I published rock-pop and ballad music in previous years under the name Skycrater, and “Journey to the Other Land” (2016) was my very first album using a power-metal oriented sound.

Cool story. Why a one-man band and not sharing the efforts with some other guys?

Maybe the questions shouldn’t be asked to me, but to the other guys? (Hahaha) The problem is my location and lack of contacts. Back in Canada (2015) I worked with drummer S. Bilodeau but we didn’t manage to get a nice studio sound and eventually gave up. I tried a few times with other musicians, but simply didn’t meet the right guys yet. I’m presently living in a University which focuses on classical and traditional Chinese music, and here no one is really interested in my projects...

For now, but who knows if they will all end playing heavy metal hahaha It called my attention that you are based in China, Nanning, in the beatiful region of Guanxi to be precise, how did it happen?

I always wanted to improve my singing skills. As my elder brother (who also drew the cover of my recent release) chose to study Chinese Traditional Painting here in Guangxi, I though it reasonable to join him for my own study since his University also teaches music. Life is very cheap in China and it will allow me to survive on my economies for a few years. I also like the Oriental Culture, and living here after my study is quite possible. 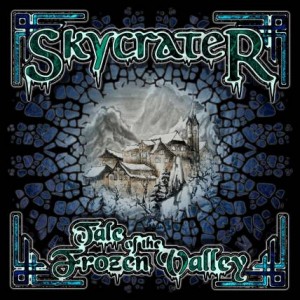 Has the life in China, with its culture and all around its style of life, infuenced your music some way?

Although I am very accustomed to the local food, people and traditions, I am still quite occidental. Nevertheless, Guangxi traditional music is part of my study, and it surely influences my work, whether I notice it or not. I didn’t pick anything Chinese on purpose yet, but I might use Chinese folk as inspiration in coming albums.

Yeah, that’s it! In 2016 you released your first album as Skycrater, with the name of Journey to the Other Land. That was a good album, but I think this 2017 with your second effort, the great Tale of the Frozen Valley, you have accomplished a great improvement in terms of composition and feeling

As I stated earlier, I entirely agree. "Journey to the Other Land" was more like a test: I was trying something rather new to me, and still didn’t really know where to start. “Tale of the Frozen Valley” is more complete, better structured. I am learning as I go...

We could define Skycrater as a heavy metal project with an epic flavour on it, do you agree?

The label “Heavy Metal” always scares me a little because of its aggressive flavour, but I reckon I couldn’t call my music “rock”. I aim much more at “epic” and “powerful” than “brutal”. Thus I think “Epic Metal” is the best way we could put it.

I give you the point. One album by year is a high rate, how much do you usually need to compose and record and album, and how is all the composition process?

I am a music student with relatively lots of free time, thus allowing me to work quite a lot on my projects. “Journey to the Other Land” took me 3 weeks, “Tale of the Frozen Valley" took me 3 months… I generally start by writing a full story which will be then divided into chapters, each one being a song. Only then do I start looking for inspiration and melodies to match my songs. Once I have the music I work on the lyrics, following the theme of the story’s chapter. I record in my dormitory room, with very scarce material. The album I am working on now is taking me more time, probably because I aim at a higher production quality.

Amazing… The producing and mastering tasks are made by yourself too?

So far yes. I tried to work with a friend who studies mixing and mastering for “Tale of the Frozen Valley”, but he kept procrastinating and I eventually lost patience and used my own mixes. I have no income whatsoever so far, so can’t really afford a professional studio. In future things might change. 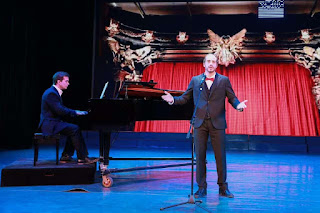 Well, that could be like a completely brand new world for you, if with the limited equipment you own right now you’ve been able to record “Tale of the Frozen Valley”. What are the lyrics about?

I like medieval fantasy (I am a big Tolkien fan), and try to mix in some philosophy and deeper thoughts. I hate commercial songs without meaning, and even more songs with aggressive or immoral meanings. I try to make an album with different emotions, and a profound spiritual morality. So far I always worked on making the album a complete story with each song being a chapter. It gives a deeper feeling, a more complex emotional experience.

What bands have influenced your sound?

I very much like the operatic-metal mix used by Nightwish with their first singer. My biggest inspiration though is Blind Guardian, in particular their albums “A Night at the Opera” and “Nightfall on Middle-Earth”.

One of the things I most appreciate in your album are those epic moments you express so well, as in the fantastic Foul Treachery

Thank you very much for the compliment. Indeed I love the "epic" flavour in power-metal music, and try to reproduce it as well as I can. Although, I feel I still need to improve the vocals, and hopefully my next album will be one step higher.

I also think you have made a great improvement in the choruses regarding your first album, and in general more elaborated songs

Thank you again. I worked really hard on the backing vocals, and used more complex structures for my songs, trying to avoid repetitions and often adding “bridges”, a technique which I never used in my previous rock-pop compositions.

What kind of songs you enjoy more composing?

I enjoy the more powerful songs, although I also need the calmer ones in order to “balance” the album, and because of the story progression. Each song needs its feeling, and I enjoy anything if I manage to grasp the feeling I look for.

How can any guy buy Tale of the Frozen Valley?

I sell through CD Baby (an indie music service) on many web platforms like iTunes, Amazon, Spotify, etc., and I have my Bancamp website. My music is also available on free websites and torrents trackers. I don’t mind, I am happy as long as people listen to my work. When I will reach a certain level of popularity I will probably publish my music on CDs and Vinyls.

Very clear ideas, good. China is a very large window to the world right now, but in terms of Metal in what stage you think they are now?

I like China’s traditional and folk music, but unfortunately their modern music business is ruled by commerce. Everything is commercial: singers must be young and beautiful (to magazine standards), their music must be radio-friendly and their lyrics as futile as possible. It leaves very little place for unusual projects like mine, and the only metal bands I know in Guangxi focus on very “cheap” commercial thrash metal. I was told the rock stage is much better in China’s North, like Beijing, but I didn’t experience anything so far.

Well, I was living for some tiem in Beijing and I agree that the rock scene is richer there. Do you have the chance to make any gigs in China or that is out of the picture right now?

Right now it is out of the picture, the only stage appearances I do for the moment are classic opera concerts (because of my operatic tenor study). I think it would be easier to go live in Russia, Northern Europe or Japan, where my musical style is more appreciated, but I am still without a band….

What are your plans for the future, Federico?

I just keep going on. I like composing, practicing vocals and guitar. I keep learning and getting better, and hopefully one day I will meet with enough popularity to live of my work. I started my third metal album, aiming at a more elaborated sound, with longer intros, more acoustic guitars and more complex backing vocals. As I get better, I also see more clearly my weaknesses, thus I will work hard to reach a higher level in quality in both music and lyrics.

We will be ready to listen to your third album and appreciate the evolution on it. Thank you very much for your attention, if you wish to add something…

Thank you very much for this interview, I said pretty much everything I wanted to say. Cheers!
Publicado por VPOWER en 12:59