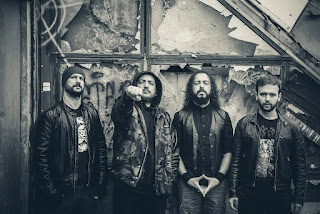 We are proud to offer you another chapter on Cult Metal Bands. Yes, this time we travel to the small Albania to talk with the best band ever in the country, CROSSBONES. A direct chat with Rock & Metal legend Olsi Ballta, a guy with a long career but with passion for Metal still intact, as you can feel in his words. We talk about their second album, the very good moment the band is currently living and many other things. Enjoy it… on Metalbrothers.es (what else?)!

It’s a pleasure to talk to Crossbones, a Metal legend in Albania, and with Olsi Belalla. We could say surely you are the most international band in Albania, right?

Crossbones just celebrated 20 years in the Albanian rock/metal scene and we really worked very hard to make a name for ourselves. We have been playing countless gigs in Tirana, but also in the region including Montenegro, F.Y.R.O.M. Greece and Kosovo. Four more dates are already confirmed for Italy. February 3-4 and Tirana and Thessaloniki 10-11 of March. The worldwide release of our new album is helping a lot for our name to be heard in Europe and beyond, USA and even Australia. And this is just awesome. This is our purpose, to share our music with the world.

That sounds very, very good. Let’s talk about your current line-up. Olsi Ballta, founder/vocalist and original founding member, an a legend in Albania’s Metal,  is still fronting the band, but what can you tell us about the other members?

Well, yes, i have 20 years already since the day that Crossbones was born. I always believed that this name would have a long journey. I always dreamed big about this name. But i did with my friends, ex-members, great friends and current members and brothers that make the current line-up.

There is Theo on drums since 2010. We know each other from Fine Arts Academy of Tirana where we studied visual arts, so bringing him in, i believe it was one more higher gear for the band. He likes apples hahaha...

There is Ben on guitars, joining the band for more than two years now. Having a more prog background, Ben helped enriching the band musically but also staying loyal the band's DNA.

There is Klejd, the newest band member on bass. After one year in, I think he is doing a really good job and i hope it goes on like this. The rhythm session now is more tight. It is important to function as a whole and for a band, this is crucial. I am really thankful and it seems really good so far. Fingers crossed.

Crossbones probably was the first band in Albania recording an album in cd format and the first ever to record an album out of the country. How do you remember those early days, Olsi? 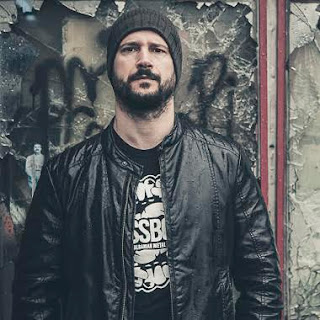 Yes. Crossbones is the very first band in Albania releasing an album in CD format. Days Of Rage was self-released in 1997. A very dark year for Albania. We were teenagers and entering the studio and having our songs on a CD, produced in Switzerland, it was unbelievable. I have to thank my friends and the original lineup Arbi Xhelo, Klod Shehu, Alban Male and Red Hasa for making that record possible. We made history together.

You did, no doubt. Crossbones is a band with a long experience, born in 1996. Since that distant date what has been the best time for the band?

There are a lot of great times and moments in our band's history. For sure "Days Of Rage" album is the first i guess, then playing for the first time outside Albania in Balkan Underground Music Festival in Skopje F.Y.R.O.M.  in 1999 and so on. There are also a lot of important gigs we had in the past like the one at 8Ball Club in 2015, first time ever in Greece, or opening for our friends of Rotting Christ in December 2016, RockStock Festival here in Tirana and Steel Wings Moto Meeting again in Tirana just to name a few.

Anyway i have to say that had a lot of difficult times, like any other rock band out there. The new album WWIII is another great achievement, projecting the band towards a brighter future and opening new horizons hopefully. Finally an Albanian band is gaining international recognition and this is amazing. Success is not final, failure is not fatal: It is the courage to continue what counts. This is our philosophy.

A philosophy that has made Crossbones an international act, despite being from a so small country as Albania, especially in terms of Metal.  It’s easy to say it, but there are 20 years between your first album, Days of Rage, and your brand new album WWII. What was the reason or the spark that reactivated the band and made you record a new album?

Yes. This is true. But i have to say that Crossbones has always been a very active band, especially in Albania. We have already self-released "Toxic Waste" and "Alive" EP in 2015. Albania is a small country with its own problems and rock/metal music is still small. We don't have the proper infrastructure for rock music industry. The bands suffer from the lack of promotion and support. Massmedia is filled with commercial music and rock is overlooked and left behind. The new album of course is a strong drive to get things moving and i think it is the right moment to be heard and seen. Also the recent events influenced this album a lot. Hopefully our music ends up in the ears of those who deal with music industry. Definitely we got to go touring.

Totally agree with you, Olsi. It was a nice surprise that WWIII still keeps the band’s essence, the sound that was your mark, but also with new ideas, is it what you were after?

Sure. There's no point in repeating yourself. It is important to stay loyal to the values, the sound and the DNA that Crossbones so carefully and slowly built through 2 decades. And this was far from easy. But also adding some new flavors, perspectives and touch makes the music sounds fresh and alive.

My favourite track is Schizo, but what is you preferred one?

Hahaha. Schizo was born quite some time ago. It begun with former band member and long time guitarist Klod, who started this song together with me. It took time and effort to shape the song. During the recording process Klod moved to Australia and didn't have the chance to be present, but Ben, the actual guitarist and Klejd on bass did a great job in keeping the spirit of this song alive and yet blend it with the rest of the material.  I have a few songs that i like but maybe the one that keeps clicking is "I'm God" part 2. Maybe because after all that storm and thunder and shouting, this song comes so quiet, minimal and yet open wide to the ears and is like the quintessence of this album. Life always prevails. 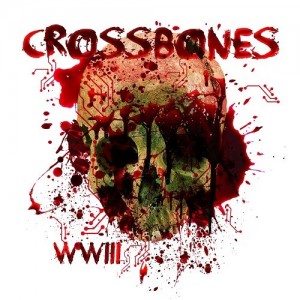 You mix several subgenres, we get some heavy metal, thrash, and groove metal too, even some hardcore..., so, which style you identify more with?

Crossbones was always like this. We always had pieces and bits of music we like and from bands we're influenced by. Diversity in music is good and helpful. The point is to blend it all together and make it your own mark. Regarding style, maybe "post-thrash metal" term can work? The end result has to be qualitative music that communicates with the audience regardless of how you label it.

Lyrics are a very important part of the song because they carry the message and the message has to be clearly conveyed to the listener. They travel from mouth to mouth and get stronger. It's been 20 years now that i write the lyrics of Crossbones and i always pay close attention to words. The lyrics on this album are inspired by the recent events, war, conflicts, refugee crisis, terrorist attacks, the endless quest of mankind finding and defining itself in this consuming world we live in. I would like to close this part with a few verses written at the end of the booklet:
"We are the people, the machine, the plague and the suffering,
We are the rich who feeds on human dreams
We are the poor who feeds on thick blood streams
We are the children washed ashore
The tears and blood, we are at war
Please, no more."

Awesome, man!  Time to talk a little more about Metal in Albania. How do you see it? Has anything changed in these last 20 years?

It started really good in early 90's. Rock bands, heavy metal bands, i mean rock music was really strong and people seemed to dig it. Then it had a down fall at the beginning of the new millennium. Rock music was overlooked, abandoned. The rock community survived but the concerts and festivals started to fade. This is the reason many bands quit. But recently, at least in the last five years, things are improving. Rock music is played live on clubs and pubs, covers mostly, but also the rock community and the rock scene is building up. There are new bands emerging and there are also foreign bands coming to Albania. And this is a good sign but we all have to help and cooperate in building a solid rock/metal scene.

Very true. How can anyone get your WWII cd?

Our new album comes in two formats, digipack and digital and you can either buy it online(Apple Store, Amazon, Deezer etc) or get it through direct contact with us or in every gig we gonna have from now on.

Finally, what are your plans for the future?

Short term plans are four confirmed dates in Italy, Albania and Greece beginning of February and March. We are releasing three music videos, one of them a lyric video. Long term plans include touring around, gigs and festivals. Future awaits us. We are optimistic.

Thank you, Brother! Are guys as you and bands like Crossbones who keep the flame alive!

Thank you Albert for the interview and the time you dedicated to Crossbones. I really hope to meet with you all on a tour. Thank you for your support.
Keep rocking and spreading the word.
Publicado por VPOWER en 14:13