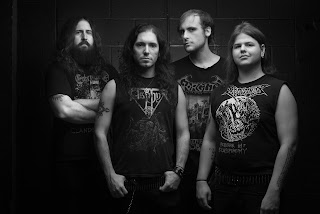 Sentient Horrow is a new American sensation in the Death Metal genre with just their first album Ungodly Forms on the streets. Matt Moliti is the main guy to blame for this success and great  sound they have developed, blending 90’s Swedish death metal with other trends that just makes theirs music more dynamic and fresh. If renowned Dan Swanö praises you… that means something.

Hello Matt and congratulations for your debut album Ungodly Forms

Hello, and thank you!

Yes, it seems that way! I don’t believe I’ve seen anything negative about it at all so far.

I had broken up my last band, Dark Empire, which was a progressive/power metal band, because I was more and more into the idea of playing death metal and doing lead vocals myself. After some experimenting with different sounds, the Swedeath style just came the most natural for me to write, so I put together a three song demo under the name “Sentience” in order to find musicians interested in putting together a proper band to play live and maybe generate interest from labels for a full length. I found a drummer and rhythm guitarist as well as Ian (on bass) at this time. That lineup played together for a little over a year before we changed drummers/rhythm guitarist to the current lineup with Ryan (drums) and Jon (rhythm guitar). Once Testimony showed interest in releasing the full length we had recorded, we changed the name to Sentient Horror to avoid confusion with a djent band from the UK also called Sentience.

The famous Dan Swanö has praised your work as one of the best death metal bands, Swedish style, for the last two decades. How do you feel about it?

Pretty incredible, to say the least, and totally honored. Dan is a very big influence of mine, both for my singing and also songwriting. The early Edge of Sanity records, especially, play a role in my writing influences for Sentient Horror.

However, you are from New Jersey, what made you follow that sound trend?

For some reason, I’ve just always been more inclined to European metal, of all styles. The Swedish Death sound was the most natural for me to write. I love the mood and the atmosphere of it. And of course, the chainsaw guitar tone. Absolutely my favorite guitar tone ever, for death metal.

The story says that Matt Moliti, guitars & vocals, as a music instructor chose Ian Jordan (bass) and Ryan Cardoza (drums)as former students under his roof to join the band. With the final result on the table it seems the decision was quiet correct…

Oh, completely! Ryan and Ian are incredible musicians and we get along really well on a personal level, too. It was really a no-brainer to ask them to join.

Another question, Matt, being a music instructor helps to compose your songs or it is kind of you always play or repite the same estructures?

I’m not sure if being a teacher had any direct impact on my songwriting. I know I’ve had to figure out riffs by a lot of different bands in all sorts of styles over the years, so I’ve come to learn how different artists write and arrange their songs. I think what fascinates me the most is the history of it all. Seeing where different bands get their influences from. I think thats really cool. Like… this band got that idea from Metallica, but they got that from Diamond Head, who was influenced by Priest, etc. Basically, all metal’s DNA goes back to Sabbath. Thats our common ancestor!

Yes, probably you are right. Dan Swanö has mastered the album, how was the experience of working with a guru like him?

He was great to work with and the turnaround time was super fast. He did a few tests and we picked the one we liked the most. I would love for him to do a full mix/master for us in the future.

In my opinion in this fantastic Ungodly Forms (album of the month in our site) you wisely combine the taste of old school death metal with some new rutes, which makes it all very fresh

Thank you! Its great to hear you say that, because personally, I don’t really consider us to be a complete throw back band. I know the kinds of guitar leads and solos I do are something that wasn’t common in death metal until the 2000s. I’m also influenced a lot by bands that were not in the Stockholm scene, such as Death, Carcass, Gorefest, etc. So I feel like bringing some of that influence in to the Swedish sound (hopefully) gives us a little bit of a unique spin on the style. 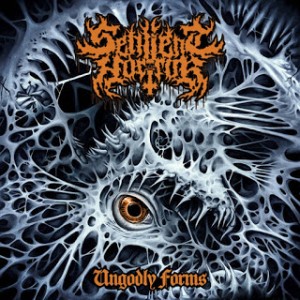 Quite cool, indeed. How much time did you need to compose and record Ungodly Forms?

All together, it took about six months, but that wasn’t all spent writing. There were some months in between where I wasn’t writing, and then I’d write 2-3 songs, take a break, etc.

Are we wrong if we think that Matt Moliti is the guy to be in charge of the composition tasks?

You’re not wrong. I do write something like 90% of the music. Our old rhythm guitarist contributed little things here and there and helped with the arrangements, but for the most part, yeah, its all me. I do like to flesh out arrangements with the whole band, after I’ve done the initial demos at home.

What song is your favorite? Have you played already in front of an audience?

We’ve actually played the entire record live! I think Celestial Carnage is my favorite. Recently we did a fan-poll to see what songs our fans liked the most, and they turned out to be the favorites within the band as well. Abyssal Ways, Splinter the Cross, the title track, and Celestial really seem to stand out to us, and to our fans. But I really enjoy all the songs.

With your extensive background, how do you see the current Metal scene?

I’ve noticed a trend back to old school aesthetics and style, at least in the underground, which is really refreshing. I am completely blind to the mainstream metal world. I lost my interest in that years ago!

Yeah, I understand. When you were a teenager what were music your idols? Did you ever imagine that some day you could be sharing stage with them?

Haha, well for me, I hadn’t gotten into death metal at that point, so my idols at that time probably wouldn’t be sharing the stage with us unless it was a big mixed genre festival in Europe or something. My guitar idols haven’t changed a whole lot though… I still really love listening to Yngwie Malmsteen and all the Shrapnel Records guitar players like Jason Becker and Paul Gilbert. Since most of my favorite death metal bands are split up now, I think the number one that is active that I would love to open for would be Carcass.

Maybe just a matter of time to share stage with Carcass, I see it…, and Gilbert seems a very friendly guy…:) I suppose you have plans to play some gigs around this 2017, what are your following dates?

Yes, we already have I think five or six booked at this point up through the end of spring. We are focusing a lot on the northeast region and branching out from just playing in Jersey or NYC. Thats one good thing about being in the Northeast, since the states are a lot smaller than in the rest of the country, its fairly easy to travel to a wide variety of places.

What are your plans for the future?

Do a lot of gigging in support of the record, then start writing new material for a follow up!

Thanks for your attention and keep on this high level

Thank you for the interview and thanks to anyone who is reading J . I hope you all enjoy Ungodly Forms!
Publicado por VPOWER en 23:58