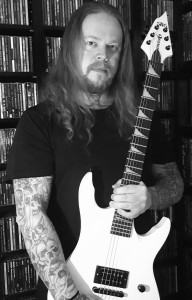 The deadly duo JOHANSSON & SPECKMANN is not a duo anymore, but they sound as every fan ever expect from them. Now they strike back with their fourth attack, armed with nine new tracks full of old school death metal, that they know so well how to achieve, guys with scars all over, they have fought many battles. No time for ballroom dancing, posers stay away.

Hi Rogga, "From The Mouth Of Madness" is your forth album and we see the family is growing with the presence in the line-up of Kjetil Lynghaug and Brynjar Helgetun? We can consider them permanently onboard?

Yes indeed, without them the sound would be very much different so they are a very intergal part of this project.

"From The Mouth Of Madness" is preceded by a collaboration on the first MEGASCAVENGER album, how was it?

Well we worked so well toegther on that song, so we both agreed that making more music toegther would be very much fun, and thats how it all started and now we have four albums out...

"From The Mouth Of Madness" is the follow-up to the much acclaimed "Edge Of The Abyss", a step forward or the same level?

Yes very much so I would say. THis time we took the same sound but refined it a bit further, there are more heavy parts more melodic parts this time, and the sound is a bit more heavy aswell I think. The voals are stellar just as always, some very cool ideas in these songs I think.

Brynjar is a monster haha, he just do what we ask him, wich is to do awesome drums from his own ideas of how he wants it all to sound. Bryjar writes all the drumparts himself, so he is to thank for the awesome groove and heaviness of the album.

No unpleasent surprises, good old school death metal, how was the composition process? 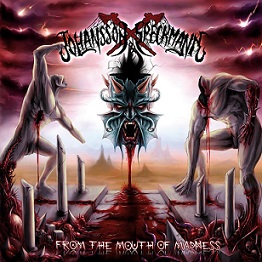 Same as always really, I sit down and churn out a bunch of riffs that turn into song structures, and then I end it to Brynjar for drums. After that Kjetil comes by and does his amazing lead work and finally we send it all premixed to Paul, and he enters the studio and does his thing and then we mix and master it all.

Kjetil Lynghaug is on charge of lead guitar, how has it pushed your songs?

Well it hasnt pushed my songs in terms of writing, but it has elevated the sound of the project so much, he does these crazy cool and virtuoso solos that really makes the music shine. Hes quite a genius, and when he comes in and does the solos he hasnt even heard the songs before haha.

Rogga Johansson is kind of a institution in Death Metal music, with your curriculum it must be so easy to sound as Death was meant to be originally

I have my sound I think, be it good or bad for other people, its not for me to say or really care about much. I write what i write, it comes out fast and easy mostly, and then an album is done, its been like that always almost haha.

"From The Mouth Of Madness" is a bulldozer from beginning to the end, would you underline any track?

I really couldnt, but theres a reason why the opening few songs of the album are all rather heavy, as I think opening up with a heavy bunch of songs instead of fast ones is unusual and works great, atleast this time for us it did I think.

Yes it does! Its just like the previous piece an artowrk he had for years, and we thought it fit us perfectly, especially since the previous one was in the same style, and really capyured the feeling of the music if you ask me.

With four albums in your saddles JOHANSSON & SPECKMANN is already a renowned band, I suppose you will have many invitations or projects offers, hard to concentrate in just a thing at the moment?

We all have different projects all the time, but when its time for this project, we all take the time to make it as good as we can, and I think it has worked great so far.

By the way, hopefully we will have more of J&S for many years, because if any of the two bosses in the band quits we would have the name uncomplete… haha?

Haha yes! Well if its just Paul left I guess it will turn back into Speckmann Project haha.

True as hell haha Any specific intentions for this 2018?

Not really, no shows planned. However theres a 7" split single coming this summer, wich is related. Its our main bands that are doing it, Master and Paganizer. That will be very very cool.

Thank you very much for your attention Rogga, keep kicking asses! if you wish to add something…