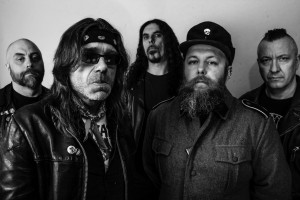 A new album from Solstice is like manna for the hungry souls of the metal legion who loves their music. So, at last the long awaited third album from the band is here and I do believe "White Horse Hill" will not dissapoint anyone and will put Solstice once again among the bands that play for the Gods. Hopefully we will have not to wait another two decades to get another chapter from these epic doom machine. For now, let’s enjoy the new amazing chapter and these few words with Paul.

Hi Paul!, when we talk about Solstice we are referring to one of the big names in the Epic Doom, that’s why a halt of 20 years since your last full-length almost killed us lol

A long,long time. It was already 14 years since New Dark Age when I joined the band, so in that sense 20 years doesn't seem so crazy 'cos it's been many years since people accepted that a lot of time was gonna pass before the follow up to New Dark Age would arrive. But....time takes time, and only time decides.....

With your demo “To Sol A Thane” from 2016 we saw our teeth grow longer and longer with each listening, the new album completely confirms your great moment

I think the To Sol A Thane release, being that it was essentially a demo, was a very good representation of Solstice as we were at that stage (2016). It also, I think, gave a very good indication of where we were heading too!

Personally it does this quite a bit better than our Death's Crown Is Victory EP did, and that's simply because the opening song – I Am The Hunter –as far as I'm concerned is absolutely not up to the standard of all the other songs that have been written since Andy and I joined the band. And, again, just my opinion...but I think Death's Crown itself (the title track) towers over that song in every way.

On the other hand, I think the three songs on To Sol A Thane are equally representative of what we wanted to and hoped to capture. As far as the album? I think it's the same blue print as the To Sol A Thane recording but with 20 years of hope and patience realised!

All the songs in the 2016 demo are included in your new album, any variation on those tracks from the original recording?

Yeah, nothing major. Some altered bits and pieces, some new brush strokes added to the canvas (guitars in the chorus of To Sol A Thane, as an example). Vocals too. Fundamentally the same with some added shade and coluring to the melodies here and there. The version of For All Days, And For None though.....that's quite a bit different to the first version.

"White Horse Hill" is an enourmous display of riffs, epic melodies and brilliant solos, as ever with Solstice. How do you start composing a song? 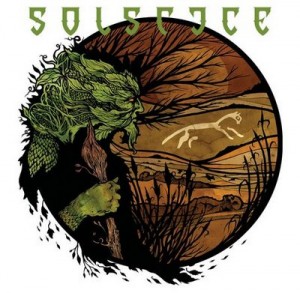 Well, I can give you a simplified answer – the song is started when Rich Walker starts composing it. OK, so that doesn't give the whole picture when considering that the version you now hear has input from the rest of us......

I write the pretty much all the lyrics these days.....but, let's be honest when it comes to music the words that are used are more or less window dressing. Don't misunderstand, I absolutely strive to write words that I can stand behind and that the band can feel respect and pride for....but they don't add to the song in my opinion.

If we're gonna focus specifically on the new album though? The solos of Andy Whittaker are the X factor I think. He is a proper lead guitarist in the proud tradition of Heavy Metal a very accomplished lead player. His real talent though is being able to write solos that are a part of the songs, rather than being  'on top' of the songs. Just listen to Under Waves Lie Our Dead, and to the solo...it's the high point of the song in my mind...better and more memorable than the chorus I came up with. Does that mean I failed in my role as the singer in that song? I hope not. It's more that I think Andy's solo in that song is a moment of genius!

Thanks for the detailed picture. "White Horse Hill" is the product of 20 years of maturing ideas and compositions or the effort is far more recent?

All songs on the album are written from 2014 onwards. In that respect, it's all 'brand new' music, but that doesn't mean that some of the riffs might have been written 10 or more years ago.....I have no idea about that. But, as songs? It's all new.

Your great epic feeling is present in every song, what do you think is the secret formula of your sound?

Rich Walker! They're his songs, and always have been.

No discussion. White Horse Hill is one of the best songs in the album and probably one of the first you wrote, right?

Of all the songs that are on the album? Yes, that's the first one we started working on.

Any song in the album that means more for you than the others?

For me? For All Days, And For None – it's of strong personal value to me.

What are the lyrcis about?

There's no answer for that question really! There's no common theme or anything like that.

I love the continuity, the framing of the images, the colours he uses. And I think it's quite different from what's common these days....... Of the three pieces we have used in the album's design, I especially love the 'Under Waves......' image! For me, it just sums up what I feel about the album and I think it's aesthetically quite beautiful!

I have read on an official statement from the band that the new album was not written for the CD/Download market but rather for that purest the vinyl format. That means you might release more new songs or that you have more new songs ready at the moment?

No! There's no other music yet! Anyone who's familiar with Solstice knows that nothing comes fast! Hopefully it won't be too long before we start on something new though! The only other thing worth mentioning is that we have re-recorded Death's Crown Is Victory. I believe that's gonna be a bonus track on the US version of the CD???
Or maybe on both European and American? Actually, I'm really not sure....but it's going on one of the versions of the album as a bonus track

The production in the album is another strong point, we ain’t gonna find the so common nowadays pure and crystalline sound, it sounds clear but also a bit raw and real!

I definitely agree with you on that point! So, I'm  not a musician...I cannot play a single note on any instrument, nor do I have a good ear for technical things in music. I know that I particularly like old Death Metal productions – the old Entombed /Dismember /Grave sound from Sunlight Studios. Apart from that I am quite clueless. However, on our new album I really love how it's obviously got clarity in the sound and everything...but thankfully doesn't have this 'perfect' sound that is common these days. It sounds like a band, it doesn't sound like 'copy and paste' in Pro Tools.

The recording was done in the same place where we rehearse, the owner has built a studio. So whilst we all did our parts. Rich and Andy spent hours and hours there with the engineer working on it. Those guys did all the hard work. Then Andy's brother, Richard, works in a big studio in London and he mixed the album for us at a very low price, and used a LOT of his own time to get it done. Without Richard Whittaker, we would never have been able to afford to do the album as we have done it!

Haha simple enough! Solstice is one those bands that many reviews quote to define a style as Epic Doom, how do you feel about it?

Sure...it's absolutely fine in my opinion. Human beings label/categorise/tag everything. It's just a part of language. I might disagree with it, or I might not. Doesn't matter I'm not gonna tell people what they should or should not say, that's what people like Kim Kelly do. Not everyone has the  ego or sense of self importance to be that full of themselves!

I know it may be too early for this question, but the sooner we prepare for it the better lol, we will need to wait again 20 years for another outstanding album or you are already in full composition mode?

Well, let's actually have the album physically released first. One step at a time! It has taken two full decades to get White Horse Hill done, so I can't even try to imagine a follow up album. We'll start with some new stuff whenever Rich has something. There's probably nobody on this planet sower than him when it comes to new songs...but if that's what it takes for music as good as he has written over the last 30 years or so, then I see no problem! Short answer is: it's too early to say!

Well, at least the prospect gives us hope! Thank you very much for your time and congratulations for the great new album, if you wish to add something…

Thank you very much for taking the time, effort and interest to listen to the album and send these questions. Be good!
Publicado por VPOWER en 12:33