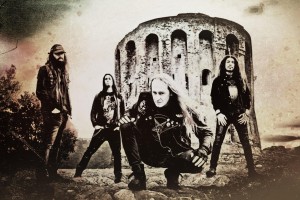 The return of the legendary Italian Thrash Black band! ‘The Age Of Dead Christ’ is NECRODEATH’s 11th album, 33 years after their inception into the scene, when the now legendary demo tape ‘The Shining Pentagram’ was released. NECRODEATH go back to their roots releasing one of the fastest, most violent and brutal chapters in their deadly musical path and we were fortunate enough to have the chance to talk to this Italian Metal institution. Enjoy it! 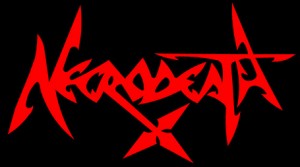 "The Age Of Dead Christ" is you 11th album, more than 30 years of career, how do you feel about it?

GL: 33 years of career Necrodeath is a life! we have experienced many emotions and experiences that have made us grow both as musicians and as people ... The band was born in 1984, publishing the first demo in 1985, since then 33 years have passed (the age of the dead Christ). We are still here after all these years playing and having fun as in the past, we still have a lot of energy to concentrate on music and this new album proves it.

Since the legendary demo The Shining Pentagram and first album Into the Macabre only Peso remains as an original member. How is the current Necrodeath from inside?

GL: from 1984 to 1989 the band had a different formation, with Peso (drums) a founding member together with Claudio (guitar). In 1990 the band broke up to be reformed in 1998 with a new formation where the only original member remained Peso. The current line-up has been stable for about 10 years and I think it will last for a long time. The fundamental thing for a long cohabitation is to get to know each other and understand each other, the music will do the rest!

I suppose the title of the new album is directly connected with the history of Christ, how did you choose it? 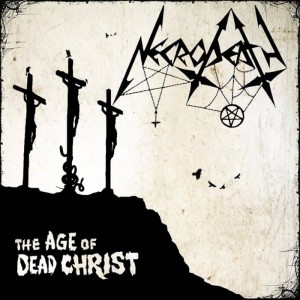 Flegias: Actually the title is not really connected with the history of Christ, the link is with the age when Christ died and the years of our career: 33 years. So this is the reason why we have chosen this title. The lyrics deal with an historical consideration and speak about if it's right to say that Christ has sacrificed himself for people and his apostles after his death immediately started to spread his name everywhere...why in the years thereafter this belief became a slaughter, killing millions of people in God's  name until the coming of the Enlightenment?

Flegias: The cover album was drawn by myself, trying to recreate the typical demotape graphic of the eighties. Particularly we took inspiration from Hellhammer's demotape “The Triumph Of Death”. We wanted to recreate the same feeling that we wanted to give also with the music, that is a throwback to   our sound. This is why we have also chosen to use our old logo.

Flegias: Every song have a different story from the others. They range from historical to religious and fantasy themes but behind each one of them you can find actual issues. We like describing the raw reality  referring to the past, our intent is to reflect on how much mistakes of the past continue in being perpetrated nowadays.

GL: Yes, this album was designed to play aggressive and old school, we did not want a perfect album, but a sound aggressive dirty and heavy. We composed it very quickly and recorded just as fast to capture the essence of the song. For us it was very natural to compose it and we are happy. We were inspired by our first works and all our musical background that has its roots in classic thrash death black metal, so this album recalls the 80/90 years and that sound. We are receiving good feedback and this gives us great pleasure.

You have included a new version of the classic ‘The Undead’ from your album Into The Macabre with A.C. Wild of Bulldozer on vocals, right?

PIER: Yes! Bulldozer are great friends of us. So many times A. C. Wild has come on Necrodeath stage playing The Undead with us. So finally this was the perfect album for moving this collaboration to the studio

This might well be your best album in the new century, what do you think?

GL: for us every album has a story to tell and we are proud of every composed song. Surely "the age of dead Christ" is a record that we like a lot and that I hope will please many people. When we compose a song we never think what effect it will have on those who listen to it, so every time is a new bet .... the important thing is  for us  to be satisfied with the work done.

How long have you worked on "The Age Of Dead Christ"? All flowed smoothly?

PIER: About two years. We don't live close so we cannot practice a very day. Usually after some gigs we      will remain in studio for a couple of days making practice and writing new material. Because we wanted to record everything live and together the work was harder and longer, but we had goodtime also!

The black, raw & aggressive Thrash you show in "The Age Of Dead Christ" will continue on next releases or was just the ocassion for celebrating the 33 years?

PIER: We don't know at the moment. "The Age of Dead Christ" became alive naturally, not because of the 33years of career. We plan every album when we start composing...anyway at the moment the raw & aggressive way is a good way...

I suppose you will tour around, anything already programmed?

GL: yes ... we have many concerts already scheduled and many are coming in these days. We will play mainly in Italy from March to October 2018, but also some dates in Europe. We will try to schedule as many concerts as possible to make our new album known and to meet new friends. So we hope to play in your country too!

On Metal music any past time is better or future is all that matters?

Flegias: Obviously in the past metal music has lived important moments that won't be repeated but of course we must look at the future and not avoid on memories of the past.  Necrodeath are always searching new musical feelings without forgetting its own origin and the past.

Thank you very much for your attention, if you wish to add something…

PIER: Thank you for the interview and the support! Check out our new release on CD  www.scarletrecords.it  and Vinyl www.tfhrecords.com . Keep you updated on our upcoming shows around Europe www.necrodeath.net
Publicado por VPOWER en 2:18