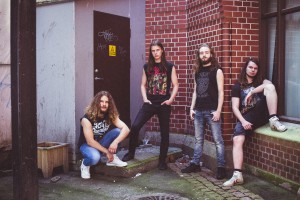 VORBID’s first full-length ever will be out is here and it shows a rapid and intense growth into a quite unique style of Thrash Metal. But maybe the best is yet to come, as the band comments to us in this interview, it seems they are evolving into more complex sounds and only destiny knows what will be next. But for now, let’s enjoy their debut “Mind”, one of the best debuts I can remember from a thrash band in so many years.

Hi guys, your debut album "Mind" will be out in April 4th through Indie Recordings, how do you feel about it?

Hi, first off, thanks for the great review! The release date varies from different places on the internet but the one we have is 13th of April. When we got the call from Indie Recordings in the end of 2017, we knew that 2018 was going to be a good. We’re treated very well, and are excited about the response on the album!

Vorbid is a young band formed but young people, as least it appears so from the photos, but you deliver a storming thrash attack of high-octane, where is the magic?

We have a really synergy with each other. We also have different side projects that will never become anything other than witticisms, but serve as an outlet for the music not good enough for Vorbid. We also go through the same kind of music evolution together. When one of us first started listening to King Crimson, we all did, and so on we all followed on the Genesis etc. So we all have kind of the same idea of what we want our music to be.

Your first few songs were released with your homonymous EP in 2016, any change since that time?

The first side of “Mind” (the first 4 songs) are kind of a follow-up on what we did on the EP: It’s raw, in-your-face thrash metal with some progressive and experimental elements thrown in from time to time. However, the title-track is a hint of the path we are currently taking Vorbid in: more experimental, unorthodox composition and phrasing, deeper lyrical themes etc. So yes, I would say that we are going through a change in where we want Vorbid to be, or what we want it to become. In my opinion “Mind” has more freedom to do what it wants, and the stuff we’re currently writing for a potential new album is furthermore experimental than “Mind”, so I guess there’s really no nostalgia with Vorbid and previous releases.

So, we await more surprises in the future. How long have you worked in "Mind"? All ideas were clear from the beginning of the process?

The opening track “If There’s Evil (There’s People)” were in the making as we recorded the EP, but other than that, it’s all fresh. I don’t know exactly how long it took to put the whole album together but the title track wasn’t even completed when we entered the studio to record the album. The working process went like this: We would start of by the ambition of writing a song that embraced all the elements of Vorbid at the time “Mind” and we knew it would be long and hard (no puns). As we worked on the piece that ultimately became the title-track we would often get stuck and write other independent pieces that became stand-alone songs like “Zombie”, “Invention Intervention” and “To Mega Therion”. I guess the complete process of making the 23 minute title-track took from 6 to 8 months. 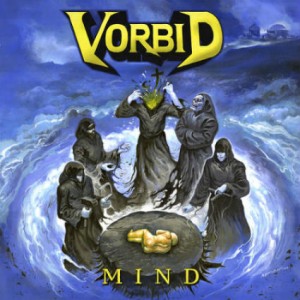 Not wonder it’s a killing track. Please correct me if I’m wrong, but I think "Mind" is kind of a conceptual album, what’s it all about?

Yes, you’re right. “Mind” is kind of an abstract concept album where we dive into the factors that make up the human mind and what controls it. In part 2 to the title-track we tell the story of five age-old beings that are set to craft the human mind (as pictured on the cover art). Four of these five beings are personifications of the first four songs of the album and their themes: Political control, change, fear of others and fear of yourself. The fifth (centred on the cover art) being is the personification of the son “Mind”. This fifth character concludes there are too many ifs, whats and whys for the human mind to comprehend and too many sides to one matter, so he creates the concept of an almighty “God” to keep it simple: “Though engulfed in enigmas of right and wrong, the birth of gods were called”. This is how the song “Mind” starts, and it follows up with the problematic situation where humans exist together with the concept of God:

Cool enough! You deliver classic thrash metal but you also go farer than that an even introduce some progressive elements in your music

Yes, at least we like to think so. We like to have long and unorthodox sections, odd time signatures and tempo changes to make the music more interesting. As time went on we got more and more engulfed in the progressive music of the 70ties, and that sometimes leaves its mark on our music. As mentioned, the stuff we are currently writing is going to have more of this influence so we hope we are doing it well enough for people to like it.

All sounds good to me, but guitars are really brilliant in your album with a countless number of solos delivered

Thanks man! I don’t think anyone would argue that Vorbid sometimes relies on the instrumental. We find thrash metal a good foundation to make the most out of the guitars: you can have clean parts, aggressive parts, harmonies and melodies, a ton of solos… you can pretty much do whatever you want with the guitar in thrash, and the genre goes really well with elements of other types of music, so we have a lot of working space when we write.

And of course we have to talk about that great song that gives name to the album, Mind. 23 minutes of song. It was your intention to do such a long and crazy song or it happened in between many beers?

I have to admit that we were really into the album “Hemispheres” by Rush at the time, where the title-track clocks in at 18 minutes. This served as a direct motivation to do a “long-song”. So, it was actually a goal from the start to have it reach 18 minutes or more. I remember all the times at rehearsal where we would time the song, and how disappointed we would be when it only reached 7 or 8 minutes. We really wrote the song from start to finish and didn’t just piece different sections together as we saw fit, that’s why it took so long, because all the parts had to glide well into each other.

Thanks to Rush for the initial push, then, and you for the big effort. Mind, the song, can be considered itself as an ep hahaha, you will play it in your gigs?

Haha, you could say that. We haven’t played it live yet but are planning on doing it for our gig with Tantara at Hard Rock Café Oslo at Indie Recordings’ label night the 28th of March. It only depends on if our playtime is 30 or 40 minutes (it would be kind of dumb to play 2 only songs).

Don’t forget to upload it to Youtube! By the way, this album is preceded by several contests you have won, it seems you were destined to do something important and Mind is the culmination of that trend

I think some people might like this album and the musical style of it, but I also think that we are only starting to find our true genre, the perfect balance between thrash, heavy, speed, melodic, mellow and progressive, if you know what I mean. I like to think that “Mind” is our “Caress of Steel” where we did some things spot-on and other things are left to be perfected. So, in my mind our goal is to make that perfect album where everything fits and Vorbid becomes Vorbid.

Have you already played with some big names around? Any live dates programmed?

We’ve done gigs with Tony Carey’s Rainbow Project and Aura Noir, and of course the Wacken and Bloodstock gigs of 2017. It’s not like we were backstage with Dave Mustaine, but we got to chat with Jeff Waters from Annihilator and he even introduced us at Wacken. We’re currently planning tours and gigs with oyher bands, but as of now I can’t really reveal anything more than our gig with Tantara who are heroes of ours.

Vorbid is one of those bands that make you believe that thrash metal is still alive, how do you see the genre nowadays?

Thrash is not a big genre in Norway. The metal scene in Norway mostly consist of core and djent acts that try too hard. I’m not trying to be a dick as I can have a certain amount of love for any kind of music as long as it’s done good. The bands Art of Deception, Fear Theories, Fuzz Generation, Underwing and Vanvidd are some of the bands that come to mind when I think back on good localbands that we’ve played with, though none of them play thrash.

Thank you very much for your attention and congratulations for your great debut album, if you wish to add something…

Again thanks a lot for the review!
Publicado por VPOWER en 8:41