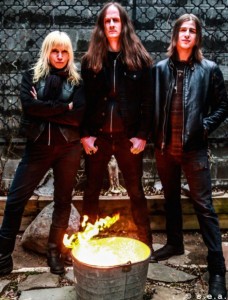 Originally self-released, SANHEDRIN ‘s debut album “A Funeral For the World” quickly gained recognition and called attention from Cruz del Sur to release a very especial vinyl version. The trio produced a self-titled demo in 2015, but it wasn’t until “A Funeral For The World” did the band come into their own. Learn more about their first album and the things to come in the near future from these great American band.

Hello guys! On april 27th you are releasing again "A Funeral For The World", I say again because you presented it already last year, how was it?

J:  We self-released the album in September of 2017, with all aspects of the release being handled by the band. Through the classic “word-of-mouth” of the underground, there has been a great response and a lot of support and we decided to partner with Cruz Del Sur so that this record and our next can reach a wider audience.

Is there any essential difference between your “selfedition” version and the 2018 version through Cruz del Sur?

J: The Cruz Del Sur version will be pressed on classic black vinyl, and will have an embossed version of the original cover art. It will also include a download card. Our self-release was done in limited quantities on color vinyl and with simpler outer packaging. We are excited for this new and improved version!

Sanhedrin is a band from Brooklyn with members from bands as Black Anvil, Lost Goat, etc. Has that influenced your sound or Sanhedrin is completely a new story for you?

J:  Sanhedrin in a new story as you say. While all 3 of us have past and present involvement in other great bands, what happens between us in this band is itself unique and special. That said, the experiences of playing with other people in the past, present and future certainly enrich the experience of being a member of Sanhedrin.

E: It was over 10 years between Lost Goat and Sanhedrin. I was playing in a garage band with that did not require the power of my Ampeg SVT and 8x10 cabinet. When I dusted it off to play with these guys I was so glad I kept that equipment. The sound of my rig was perfect with Jeremy’s guitar tone.

A powerful combo. What we are going to find in your first album "A Funeral For The World" is a huge collection of classic after classic songs

J:  Thanks for the kind review! With this album, we really found a way to add a collection of songs that each have their own identity while fitting well as a playlist with one another. We have a variety of influences as a band and as individuals, and we think the record reflects that well while maintaining a common thread.

All the songs except one in your 2015 EP are now included in your debut album, right?

J:  All but one song, “Saints and Sinners,” were re-recorded for the album. The 2015 release was more of a demo than an EP in our opinion. When we decided to make an album, we decided that 3 of the demo songs fit well and also deserved the sonic treatment of our engineer Colin Marston.

I also appreciate that you cover different styles in your album, from heavy metal, even some darker songs related with doom or stoner, and also some hard heavy tracks as Massive Deceiver… Where do you feel more comfortable?

J:  We feel comfortable in exploring what we can get out of our musical partnership. It just so happens that all 3 of us have very diverse tastes in music, and it converges to hear the many sounds you hear on our album. Our core is hard rock and heavy metal, and we write music that we want to hear and play.

E: I’ve played in a lot of bands and I really appreciate the musical relationship we have. Its a strong work ethic making for some great song writing. Someone described us as ‘song based’. I think that is a really good description.

I would even talk of some light progressive heavy metal a la early Queensrÿche, as in the great songs Faith Healers and No Religion, which I really love

J:  Thanks! I’m personally a huge fan of Queensryche, so I take that as a compliment. That said, any similarities in our songs are more subconscious than conscious.

E: I have never explored Queensryche until people started comparing my vocals in Sanhedrin to Geoff Tate’s. It is some very cool shit.

Truly the similarity with Tate is fanstastic in some moments. So, with all that variety one might think that this is kind of your first approach and you are still defining your style, or this is something to stay in following records?

J:  We are still developing, and will always be exploring new territory so long as we’re a band. There are a lot of aspects of  the “A Funeral For The World” that will carry over to future works, but we are also expanding our sound and our abilities. None of us are interested in remaining stagnant creatively.

Erica Stoltz also plays bass, what was first? The bass or the singing?

E: I have been singing my whole life. Bass playing came later.

Sanhedrin’s punch would no be complete without Jeremy Sosville stellar performance on guitars. Personally, I love the last solo of the album in Die Trying

J:  Thanks! That particular solo has a unique inspiration actually. For the tone and vibe, I was trying to pay homage to Eddie Hazel of Funkadelic. He’s incredibly underrated and I have Nathan to thank for exposing me to him. Of course, the song itself is quite a different vibe from anything he wrote.

What are the lyrics about in the album? Any general subjetc?

E: So far I have written all the lyrics and they range from autobiographical to Sci -Fi fantasy to how difficult the human condition can be.

E: We were inspired by this piece of iron that I found in France. It was on the ground in a cemetery where some of my family is buried, a winged hourglass, tempis fugit, time flies… We wanted the cover to reflect a gravestone for the funeral.

"A Funeral For The World" was originally released last year, are you preparing songs for a second album? Can you give us any details?

J:  We are currently hard at work on writing the next album, which we hope to release in the Spring of 2019 on Cruz Del Sur. Musically, we are building on what we learned from this album out now and we are quite happy with what we have come up with so far.

Great news. And finally, will we have any chance to see you defending "A Funeral For The World" through Europe soon?

J:  We recently announced that we will be playing Hell Over Hammaburg in March of 2019. We hope to do some touring around that same time as well. The record has been very well received in Europe and we definitely want to perform over there and meet all of our new fans.

E: We want to play in Spain!