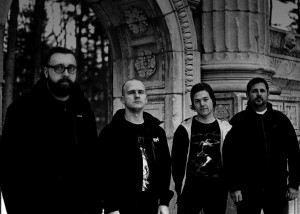 TOMB MOLD warms up engines for their next release, their second album and first for 20 Buck Spin, ‘Manor Of Infinite Forms’ moves in strange ways, recklessly contorting into cohesion until suddenly they’re proceeding with force and purpose in perfect synchronicity. A remarkable puzzle of an album, ‘Manor Of Infinite Forms’ constitutes a creative high point for 2018’s many strong Death Metal releases.

Hello Derrick, Tomb Mold is a two guys band, however you have been able to release two albums in 2017 and 2018

Actually Tomb Mold is now a 4 piece band. Since the "Cryptic Transmissions" cassette, everything going forward is recorded with the full lineup. That includes the new LP. The writing process is quick because I do all of the writing and then bring it to Max to fill out the drums and then we bring the other members up to speed. We try to be efficient.

This second effort, "Manor Of Infinite Forms", has been easier or not than its predecessor?

Definitely easier. We didn't have to handle any of the recording duties ourselves and relied on great people to take care of those things for us. Making this record was a breeze!

Listening to your music I’m under the impression that in Tomb Mold’s music nothing happens by fortune, it seems you take care of every detail

We're definitely conscious of each aspect of creating the universe that each release exists it. Sequencing the record is something I took months to think about. How each piece of art compliments the music and how it ties into the lyrical content is something we consider as well.

Who is more in charge of the composition duties, Max or you?

I, Derrick, handle the songwriting duties. Max obviously comes up with what he wants to play on drums. Myself and the other guitarist split solo duties. Max and I split the lyric writing in half.

Primordial Malignity received good reviews, what would you tell those people about "Manor Of Infinite Forms"?

If they like Primordial Malignity, then they should love Manor of Infinite Forms. The writing on it is more mature and free. Its heavier and longer than the last record too.

I would say you sound very natural, beyond the labs and the atmosphere that many bands try to work out in the recording studios 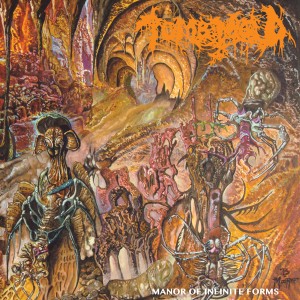 Our biggest goal with recording is to not have it sound sterile. We try to play with freedom so that the record retains some of the spirit and enjoyment that we get out of playing those songs live or off the floor. Sometimes you can listen to a record that is to technically proficient but it has no life. I'd rather a record be a bit sloppy but sound real, if that makes sense.

We try not to fall into a hole of playing overly repetitive rhythms to keep it fresh. We also enjoy working in catchy mid paced parts that force you to bang your head. Those are always our favourite parts in other bands songs.

Am I wrong if I say that Max Klebanoff on drums is the guy who commands all the tracks, more than the guitar work?

He definitely does. We always try to push his drums forward in the mix. Its something we've always liked about Nile and how their records sound. Drums are dominant and pummelling.

Its definitely a mix of Death tribute and Morpheus Descends. Really happy with how that song turned out.

Canadian scene is very alive and maybe is living its best moment in history, so many young bands… Tomb Mold is a good example of that

Canada has been fortunate to have some great stuff come out there. Lately, I've been infatuated with ExLimitir and I encourage everyone to check them out.

The release date for "Manor Of Infinite Forms" is scheduled for June 8th, are you embarking on a promotional tour afterwards?

Yes we will be touring with Of Feather and Bone through parts of the South and Eastern United States.

Another album for 2019 or time for a break and let the things get a little quiet?

Definitely will release more music in 2019. If we try to hold off from creating more music, it will drive us insane.

That’s just amazing. Thank you very much for your attention Derrick and congratulations for your great album, if you wish to add something…

Thank you for the questions and your support. Thanks to anyone that has supported us in any way possible.