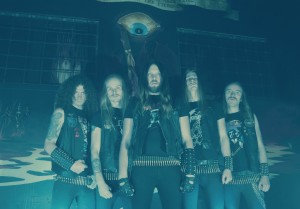 With their second album this Swedeish act confirm themselves as a real force in the Speed Metal genre, they grow from their debut album with more ellaborated songs and if you are a riffs addict here you have a gold mine to explore and enjoy. Conceptionally The Search mainly refers to what will happen when humanity more actively starts searching for other lifeforms and what consequences that will have. Welcome to the world of ARMORY.

Thanks, we are really looking forward to unleash this album upon this world.

Armory is still formed by the same people that created the debut album “World Peace... Cosmic War”, that helped in the compostion of this second full-length?

Yes we are all comfortable about the songwriting progress and everybody knows what kind of sound we are aiming for. But i think that the fact that we had to previous album to top had a bigger effect on the compostion. This time we had to put bar higher and thats was harder to do when we didnt have a debut album out. I also think it was easier to focus on the song writing this time because we had a record deal, we didnt have that when we recorded the first album, now we didnt need to feel worried about all of that stuff.
That’s all good. Another thing that has not changed are the speed tempos and riffs you deliver throughout the album?

No, that has definitely not changed. It seems very boring thing to do so we are keeping it fast.

Conceptionally The Search carries on in some way where World Peace … Cosmic War ended, doesn’t it?

Well the lyrics are deeper on The Search and we have had more time to speculate about space and the future, so it’s naturally a continuation of the previous one. But its not all about fiction, now days with the technology advancement and artificial intelligence making big progress is a real inspiration and what the world once thought was sci-fi is now reality. So the alot of the lyrics is rather futuristic than fiction.

You talk about life in another planets out there, something that is not proved but well… there is a high probability about it. If you ever meet some other E.T. beings how you would welcome them?

Not with nuclear bombs at least as the world leaders would...

Suposing there is life in other galaxies, you would bet Metal also exists out there of that’s just something exclusive of the human crazy raze?

I think gravitationalwave is the universe parallel to heavy metal, massive and in the speed of light. 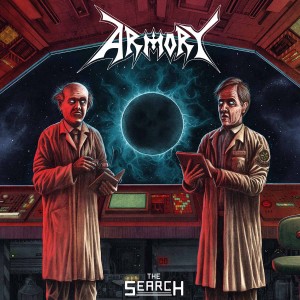 Your sound connects the current speed metal with the old trends from speed metal bands of the 80s, an underground sound but still with good technique

We don't think that much about speed metal as in a timeline, good speed metal is timeless. But I think we are mixing the raw side of speed metal with the more technical side and that’s what makes our sound. And that’s because every member of the band has his own kind of style that we then mix together.
The work on riffs is really overwhelming, great variety and high quality, what by the way was something you already showed in your previous work

Thank you very much, the riffs are really important for us and since 4 of 5 members of the band can play guitar there's a big effort behind the riffs. Personally as a guitarist I love intense riff that’s still has a weak hint of a dark melody.

I also have to underline the work by P.Andersson, he adapts very well to the band’s sound, skipping any kind of egocentricity. I think he did a great progress from the previous album and there's more variation to his voice on The Search. I also think he lives out the lyrics more on the new album. And we are all thinking about the bands best before our own centricity

By the way, the cover artwork reminds me a lot about the 80s typical thrash metal album, although you are more a speed metal band

Well conceptually a lot of the classics thrash metal bands also philosophized about the future and sometimes sci-fi related themes. But yes we see our self as a speed metal band but that of course don’t mean we don’t get inspiration from other genres. I think the cover although really fits the band both musically and lyrically.

Since the release of your first album, do you find anything different as a band, something you deal with in a different way?

We gain a lot of experience around how to drive the band forward and realized that you still need to work really hard even though you have an album out. I think we are running the whole administration side of the band much better nowadays.

Sweden is a big cradle for Metal bands, because of the similar age, I suppose, you are often named beside bands as Ambush, Air Raid, Lethal Steel, Enforcer, Screamer etc, but I think your sound is quite more raw than most of them

Those are all great bands but no we don't really see our music in the same vein. I don’t think there are a lot of bands in Sweden that play our exactly kind of music, maybe even in the world nowadays. But we love the kind of music we do and don’t get that affected musicality about what friends and other bands do.

What’s the reason behind so many Sweden bands growing as mushrooms in the field? What’s is diffenrent from other countries?

Maybe it's thanks to the swedish "folköl", which is mean "people beer" and only contains 2,8% or 3,5% alcohol. This makes you able to drink a lot of beers at rehearsals and in the studio and still stay focused, in other countries they might drink stronger beer and get drunk and don’t get anywhere?

Hahaha a curious theory that we’ll have to check out some day. The underground is the salvation of Metal in the forthcoming years or that is just a legend?

The underground is alive and well, the hunger for real metal will always be there and overcome everything.

Any tour dates programmed for 2018?

Not yet but we are working hard on it

Thanks for your time and congratulations for the good album, if you wish to add something…

Thank you! Keep support speed metal and prepare for what the search will discover