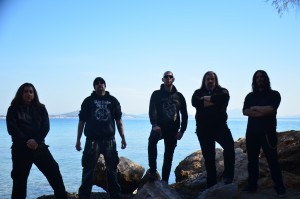 Battleroar is back with a new album this 2018.The roots of the band sink deep into the sound of legendary 80s American and European bands such as Manilla Road, Omen, Cirith Ungol or Heavy Load. Last year they released a split with Omen, in this new chapter Mark Shelton appears as a guest in one epic song… So, the fact is that Battleroar are one of the references in the current epic heavy metal. To know how they arrived there no better man than main compositor Kostas Tzortzis. Enjoy the travel to the epic land!

Hello Kostas, the long wait is finished, four years between the new album "Codex Epicus" and the 2014 Blood of Legends, good news for your legion of fans around the world

Yes, it has been 4 years, indeed. We hope, our fans will like this album also and will be rewarded for all the wait!

Although last year you delivered a small aperitif together with heavy metal legend Omen in the way of a split, how was it?

Well, Kenny Powel and I are connected with a strong and long lasting friendship. I just proposed that to him and he agreed right away! So, we did it as a ...seal to our friendship and as something to remember! Definitely, it is great to work together with someone I grew up with his music and eventually we became close friends!

Two warriors joining forces. After that split another with Manilla Road and Cirith Ungol and the trilogy would be complete hehe

18 years of career and 5 albums counting "Codex Epicus" out in June 15th. I think you have got a name already in the current epic heavy metal scene, but nothing comes for free, a lot effort and work behind…

Yes, there is a lot of work behind all this. A lot of sacrifices and a lot of effort put into this. But it is all a matter of priorities and what you want to do in life. But definitely, something like this, is more than just a hobby. It is a way of life. 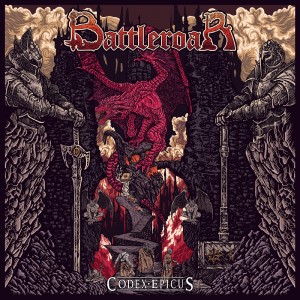 No doubt. Maybe one of those moments any fan fears came with the change of vocalist. Marco Concoreggi was much appreciated by the fans, however Gerrit Mutz has past the test and with this second album he consolidates his position

That is true. You see, these 2 singers are a lot different than each other and both in their own way, managed to fit fine. People can hear that.

There were new blood entering the band last year with Greg Vlachos on drums and Michael Kontogiorgis on guitar, how did they connect with the rest of the band?

It is way easier anymore for new members to fit in the band cause the musical style of Battleroar is clear anymore. So, all newcomers that approach the band with respect towards our fans, can get acclimated easily in the band. The same happened with this line up also.

Time to talk a little about your new work "Codex Epicus". Firstly, I would like to mention something that every follower of Battleroar’s sound will appreciate: Mark Shelton is back as a special guest in the album! Something he had done already in “The Age of Chaos”. How was it? You have a red line with the guy or something like that haha?

Hehe, yeah... something like this! Mark is like a brother to me! He is one of my biggest musical influences and a bright example in the heavy metal family! So, there came a moment while making the last album, that I needed help and inspiration on how to finish a song which I had only the music made for it. Then, I used this... red line you mentioned and Mark finished the song in the best way! So, now we have the song The Sword of the Flame and the rest is history!

It’s great to have friends as The Shark. For those who have never been lucky to work with Mark Shelton, how is to compose a song with the guy? Is he so friendly and passionate as he seems on stage?

Even more! Mark made the lyrics, the vocal lines, recorded the vocals, recorded a solo on the Sword of the Flame song in just 3 days since he ever heard the song... He is a great musician and one of the best guys I have ever met in my life!

Long live to the guy! As it could not be other way this "Codex Epicus" sounds as epic as anyone would expect, this means with Battleroar you always know what game you are playing

However, I think we still find some new elements in this 5th album, as the recurrent and epic choirs and the cinematic air that flows throughout the album

Yes, that is true. There are new elements, like the choir which participates in the biggest part of the album. All the previous years granted us with the experience to be able to use more and more elements in order to fulfill our ideas on the music we want to make.

It could not be different... this is what we like to do. This is the base of our music where we can build up all new elements and sounds.

I started composing for the album something like a year and a half ago, but not in a regular base. I mean, you make one song today and you can not know when ...inspiration will knock your door again. As for the hardest song to fulfill... it was definitely The Sword of the Flame, in which I asked help from Mark.

As usual, the cover artwork is in accordance with Battleroar epic style, as well as the title which cannot be more epic

The general idea behind the concept of the cover artwork is that, you have to try hard and fight for big things in life... You have to kill the dragon if you want to claim the ancient book of epic and write your story in it.

If you look back to your beginnings as a band in 2000, you are where you expected at this point of the road or it is kind of a dream?

Many times throughout these years, I felt like dreaming... though sometimes, you could call it a nightmare, hehe! I dont know if we should have gone further or not. I am just grateful with what we have achieved all these years. I am still here, creating and playing the music I like and I feel blessed to go on ... dreaming!

You have already played in every kind of venues, I suppose a long tour will follow the release of your new album, right? Any date programmed for Spain?

We will try to play live shows here and there as often as it is possible. A long tour would be nice but I do not know if we would be able to do it while having all of us, full time day jobs. Definitely, though, we will play as much as possible! As for Spain, it would be great to play there again! It has been a long time since the last time and we have the best memories from the people and the metal scene, there! Definitely, we will do our best to come back to Spain with this album!

That’s is recorded, Kostas haha! Congratulations for your new album and have a great year!

Thank you really much! All the best to you and the people in beautiful Spain who supported us throughout the years! Epic Metal to the End!