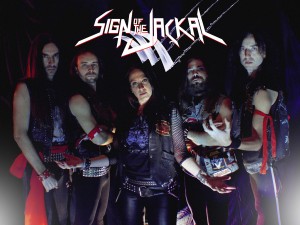 Italy has a long and valuable tradition in some Metal genres as heavy metal, power metal or doom. SIGN OF THE JACKAL makes honor to that tradition and with a classic heavy metal sound delivers their second album, "Breaking The Spell". It confirms their good debut and offers a great bunch of songs for every every old school headbanger out there!

Hello guys, "Breaking The Spell" is almost out in the streets, your second album, a long wait of 5 years after the good “Mark of the Beast”

Laura :Yeah, finally it came. Everything was about to be ready almost one year ago, but among some duties and technical recording time, release date came just on time to party our 10th year as a band. We know five years is a lot of time, but we really do think we need to release a record just if we’ve got something to say, we don’t really like to enter the studios every year or couple of, just to put “something” on the market. I do think the quality is much more important than having an endless discography, and I mean it when I say people can notice that.

When did you start preparing the songs for the new album and how was all the process?

Bob: In these years we’ve had two big line-up changes, and unfortunately they came just when we started creating new songs, that is why we “lost” a bit of time, but as long as our line-up has settled, among one year and an half ago, we started to work on new music, and between a beer and another, shows and concerts in the front row, we started to outline what “Breaking The Spell” will sound like. We really liked the idea of cohesion with Mark of the Beast, but at the same time we realized it needed to sound different, so that our fans could appreciate both in various ways.

Who is more responsible for the writing duties inside the band?

Laura: There isn’t just one responsible figure in the band… I will say usually the ideas come from Bob, who takes them to the rehearsal room, and they begin to be rearranged by the rest of the band. He definitely has the whole vision in mind and still has the last word on every piece. 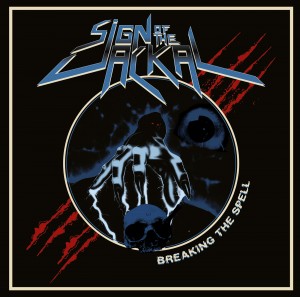 Bob: We are glad we can help to demonstrate that even in Italy there’s the chance to play Heavy Metal at good level, we are most of all considered as a lower category as a country, but by the end many different realities produce high level products, take for example Witchunter. That told, we are what we are. We like Heavy Metal, drink Heavy Metal, piss Heavy Metal, are always around supporting shows and gigs, live as Metalheads and what we do is the mirror of what we are, so horns up to Strana Officina, but we’ll be still look forward.

One of the spotlights in your team are the powerful vocals by Laura. Some people even talk about Chastain, Acid…

Bob: That’s strange to hear: most of all female vocals are seen as a true limit, even if we think it is our trademark and our power point. Most of all people forget about this “sub-gender” and even forget what came from it, great bands as Chastain (which we are fond of, and even got the chance of a small chat with Leather Leone), or Acid, or many other bands we truly love such as Malteze, Messiah Force, Taist of Iron, Blacklace. Guys, try to discover those bands again!!

Bob: we just play Heavy Metal. We know for people it’s sometime hard not to label our style with speed, heavy metal etc. but as it is for us, it’s just “Metal”, in the very primordial sense of it, we gladly blink our eyes to 80 Us Metal which I am particularly fond of. Dark atmosphere directly come from our passion to band like Mercyful Fate/Venom and for all Horror Italian cinematography such as Fulci’s, Bava’s, Argento’s movies. So we put everything in the pot, and Sign of the Jackal is what came out!

With so good ingredients the broth cannot be other thing than very tasteful. Being a heavy metal band the only I miss is a ballad. Is Laura too wild for that haha?

Laura: Ahahaha, I would love to sing a ballad! J but I don’t think they fit with us right now, they aren’t the right choice for the records until now, we’ll see in the future. No ballads till now, just HM!

What we find by tons are speedlight tempos, blazing guitars and a lot of attitude, as in Headbangers that closes the album inviting the metalheads to rise their fists and yell

Laura: yes, it is much more in our style right now. You don’t have to stop headbanging while listen to it! :D

Laura: Much more about horror cinematography, especially about the 70ies and 80ies. Take for example Beyond the Door, inspired to the namesake movie, or Class of 1999. Then, there are song telling about ourselves and our life such as Heavy Rocker, in which we talk about nowadays scene where everything goes around the bar, and the talking and the chatting and the gossip, and everything you could tell of yourself, but at the end everybody is ready to take a fashion like picture of himself for social medias but just a few truly support live scene and music.

Sign of the Jackal was formed in 2008, ten years ago, any big changes since then?

Bob: Some line-up changes, but nothing more beyond. The initial idea of the band still persists and we are really happy having found someone like Corra & Nick who are valuable supports for our band, but most of all are metalheads, and this counts more than every technical skill. We are what we are, and we play what we like, and support what we see as true, and I don’t think we will ever change.

Amen. Heavy Metal is one of those styles inside the Metal family that better endures the race of time

Laura: Heavy Metal in its strict definition of traditional metal is quite hard to be digested from a lot of people, compared for example to thrash metal witch is much more catchy among the younger. Usually those who really like Heavy Metal are older as an age, and that is why they are much more faithful and immune to fashion and changes. So, there is the hard core basis of fans, and we hope younger generation are ready to carry the flag.

OK, we won’t make more blood of it haha. What are your plans for the forthcoming months?

Bob: Right now we’ll have a bit of relax, as most of summer festival are already booked, and we have to wait until autumn, where we’ll be playing in France on the stage of Pirenean Warriors Open Air! Many people ask to come back to Germany, so we are planning a couple of shows, and maybe also Spain…. Naturally we are open to evaluate all proposals,ehehe!

Thanks for your time and speed all ahead!
Both: Thanks to you most of all for the review, so nice from you! We are totally happy you liked the record, and that goes beyond every compliment you could do. We do admire your efforts to keep things going on, and we hope we could meet soon and have a beer together m