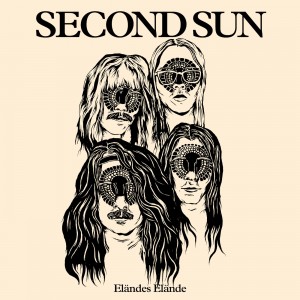 “Eländes Elände” is the second album of this band with Jakob Ljungberg at the front (ex Tribulation), they move between several rock spheres, always with a classic retro sound, but counting also with elegance, good technical level and great melodies.

They debuted with ‘Hopp/Förtvivlan’, which gave them a big push into the scene from day to night, so this second release was vey much anticipated by both fans and magazines. Let’s check if they still keep that magic creating songs that capture the listener attention.

Vems Fel delivers a classic space rock that brigns memories of the fabulous Blue Oyster Cult band, a trip to the past in a golden carriage pulled by white swans. Cool riffs, good arrangements on guitars and top solos, even in some parts they enter the realm of seventies heavy metal by the hand of Judas Priest.

Förneka Allt follows that trend with an old space rock but also with a psichedelic touch and melodies that look directly at the eyes of Pagan Altar, mistery and mystic, top of the class.

Noll Respekt is a song driven by the work on the Hammond and with a coat of folk music on it, great clean guitars, everything is on place and it seems as if they had been rehearsing for years all these tracks. I was highly surprised by the sound of Sång Till En Slagen Kämpe, more in the heavy route of the NWOBHM, although with rock always in the background, especially when the keys appear, and they actually get a very tasteful melt with it.

I want to underline the role in Second Sound of vocalist Jakob Ljungberg, it seems the guy never seek any kind of spotlights, never a scream out of place, but always delivering the right melody and dressing their music with the appropiate notes, that takes their music to a very emotional level, although I don’t understand a word of what he sings. Big rock melodies on Enda Sunda Människan i Världen, a song where the keyboards mark the pace and spirit but they also introduce an instrumental and progressive part really cool.

They play together hard rock and heavy metal from gods Pagan Altar on Ingen Tid För Allting, underground sound and cult guitars, with repetitive riffs that mark a line in the song, giving consistancy, a final touch with a brilliant solo.

On Du Ska Se Att Det Blºir Sämre you will see the influence of bands such as Camel, Wishbone Ash, a jam session in all his right. With Det Betyder Allt they get the last step in their sound by means of a ballad, so simple as magic, all the grace and talent of Jethro Tull, pay attention to the acoustic guitars, I just don’t know if this song will endure tha pass of time and plays, just try it.

Panikångestattack is rock in the vein with cool and vital riffs, accompanied by a psichedelic air. And they put the last stone with the elegant Eländes Elände,an instrumental track of dark and disturbing melodies, a real thriller sound. These guys sound fresh all the way, you never get boring with them, not even when they get more technical and I guess it is all thanks to the great task they do of pasting melodies with the rest of the parts in their compositions. Big act.