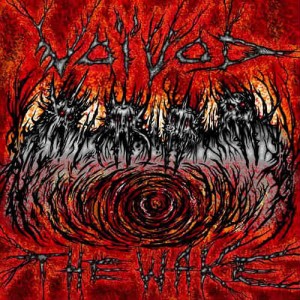 No one can deny that Voivod was and always will be one of those creative bands, out of labels and with an unique style. Formed in 1981 at Jonquiere (Quebec) they debuted after two demos in 1984 with their first LP “War and Pain”, a great debut for a career with many ups and downs, to be sincere. This is their 14th studio album.

Piggy passed away victim of cancer, Blacky departed in bad ways with his old mates, so we find Snake and Away at the front of the band. No better start for an album than Obsolete Beings, a fast rhythm and a good chorus with Snake’s nasal voice and a slow change of rhythm on the vein of Manilla Road and their acoustic parts. I miss a little more power on the song but it’s really a good shot.

The End of Dormancy is mid tempo with their special guitar sound between progressive rock and sludge/post metal. This is a hard to swallow song, as usually is the case with this band, forget the commercial and easy approach of the former song, eigth minutes only for trained stomachs.

Orb Confusion offers psycho riffs on the way of Canadian Saga or Russian Gorky Park, this album is like a tribute to themselves, to all those years working and delivering their own staff. The bass gets more spotlights here and is a song that grows with every listening, a great guitar solo here by the way.

We find the old Voivod in Iconspiracy, a good bass work and the progressive approach, bu t this time with more agressiviness and speed. It sounds as the first Melvins and the surprise comes with the symphonic touch at the end of the song.

Spherical Perspective shines with a hypnotic riff. Are we in front of Voivod’s best album for the last 15 years? May be. A great game of guitar and bass, hyonotic progressive riff and the bass playing the leader role. Moreover, the chorus is a winner and they confirm once again the personality they have ever had.

Event Horizon is a harder bite, although the tribal rhythm makes the song grow, with winks to the hardcore, the alternative rock base and a final approach to the symphonic metal. Always Moving is a mix of grunge and alternative rock in the guitars and the turn in the rhythm is absolutely amazing, it took memories to my mind of the Alfred Hitchcock’s masterpiece Psicosis with the soundtrack created by Bernard Herrmann. This takes me to another important issue: the album collects elements of symphonic metal but also the cinematic approach, to play this album is like being in front of the big screen.

Sonic Mycelium closes the cd with its 12 minutes, wisely they repeat rhythms and sounds to give us the sensation of a concept album, some moments recall the “Killing Technology”album by Voivod in1987, their masterpiece for many.

The new members in the lineup do a good job keeping the essence and identity of Voivod and the old captains, Away and Snake, play rightly their leader role after 35 years of career. Voivod comes up with a strong album, no weak points, that grows with every listening. Mature, clever, with progressive rock ala Rush, complex but addictive at the same time. Without doubt their best effort in many years and a candidate to our yearly top ten.